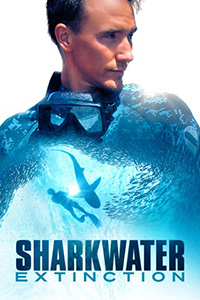 That one word introduction has probably brought a multitude of mental images to you. I’m guessing that they include the movies Jaws, The Meg and the Sharknado franchise, while also having thoughts of surfers being attacked by mindless killers with “lifeless eyes, black eyes, like a doll’s eyes”.

Popular culture has put sharks firmly into the camp of being the ultimate predator; a mindless killing machine which devours all in its path with little or no thought for anything else. That title however, belongs to humans.

Sharkwater Extinction is the follow-up to the 2006 documentary Sharkwater (which shamefully I haven’t watched, but that will be rectified very soon), and continues biologist, photographer, conservationist and filmmaker Rob Stewart’s passion to highlight the plight of the worlds shark population as its numbers fall at an incredibly alarming rate.

At times visually stunning, with its underwater cinematography showing a beautiful underwater world that humankind should be treating with far more respect, and at other times emotionally heart wrenching: the sight of sharks having their fins sliced off for human consumption and then casually tossed back into the water alive is soul destroying, Sharkwater Extinction delivers on both a visually entertaining and also highly informative level.

A one word review for Sharkwater Extinction would be passion. Rob Stewart and his team risk their lives for the sake of what they believe in, and what the rest of the world should have its eyes opened to. This is raw impassioned journalism that just has to be admired.

Sharks are not predators to be feared by every person dipping their toe into the oceans of the world, they are an integral piece of a global ecosystem that is becoming increasingly unstable due to humankinds continued desire for short-term wealth, over long-term health and sustainability. This message is at the heart of the narrative, and is a message that deserves to be heard by as many people as possible.

In an age where CGI enhanced superheroes dominate cinema box offices worldwide, it is real heroes like Rob Stewart, who are also trying to save the world, that should be applauded more.

Sharkwater Extinction is a fascinating, informative, and emotional rollercoaster ride that everyone should take. It opens in cinemas across the UK on March 22nd…just make sure to take tissues with you.