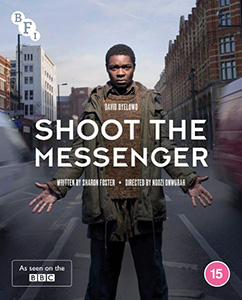 And so begins Shoot the Messenger, a powerful entry in the history of Black British film, presented on Blu-ray for the very first time thanks to the BFI.

Joseph Pascale (David Oyelowo) leaves his job as an IT consultant after reading a report that black pupils from inner city schools are being failed by the education system, and becomes a teacher at a secondary school in South London where his vision is to change the attitude and working environment of everyone there, all in the hope of giving the black pupils a better start in life with a rounded and complete education.

In an effort to give the black pupils more education time, he enforces undue detention on them and uses that time to hopefully give them the extra tuition needed so that they can pass their upcoming exams.

Unfortunately for Joseph his methods are not appreciated by the students, leading to one of them falsely accusing him of assault and resulting in the loss of his job.

Abandoned, alone, and seemingly vilified by every black person he comes into contact with thanks to the media attention the assault case caused  (which led to him being called a racist by all members of society), Joseph plummets into a dark pit of depression where only the unlikeliest of people can help drag him back out of thanks to a chance encounter.

Shoot the Messenger is both humorous and heartbreaking, putting you in the shoes of Joseph (complete with breaking the 4th wall comments to camera) as his passion and vision is taken away from him by the actions of others, then dragging you through the dark times until a tiny flame of reconciliation fires up his desires again.

As a middle aged white male I feel completely unqualified to comment on the more in-depth nuances of this superb drama where segregation and injustice within society are at the forefront, but I will say that this had me transfixed throughout its entire 90 minute running time, playing with my emotions and making question even more the things that happen in everyday life that are just taken for granted.

First broadcast by the BBC (who promptly dropped its original title of “Fuck Black People!”), this blu-ray debut is the perfect way to revisit this uncompromising piece of British filmmaking.

A strong set of special features rounds of a disc that should be in everyones collection.