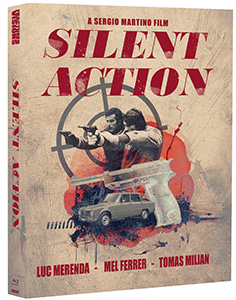 Various Italian government officials are seemingly committing suicide under mysterious circumstances, and it’s left to inspector Giorgio Solmi (Luc Merenda) to try and get to the bottom of what is happening.

His investigations lead him to a prostitute who is linked with a murder, but he soon finds out that this is just the beginning of a dark and twisted road to discover the truth.

Silent Action doesn’t feature a lot of action, but when it happens it is definitely memorable, with a crazy car chase and a helicopter attack being the  highlights. It is also always good to see Mel Ferrer onscreen, who plays District Attorney Mannino in this.

The narrative does occasionally get bogged down in a few too many details, with some of the plot points never really going anywhere before moving on to other characters whom Solmi doesn’t know whether to trust or not, but with only a 98 minute running time, nothing ever lingers too long.

This worldwide blu-ray premiere from Fractured Visions is beautifully packaged and contains some very interesting special features, as well as an original soundtrack CD (of which one particular piece of music will stick in your head for weeks afterwards) and an informative booklet with new essays by Eugenio Ercolani and Francesco Massaccesi.

A great buy, especially for all Poliziotteschi fans out there.

Review by Dave from a disc kindly supplied by Fractured Visions via Witchfinder PR.