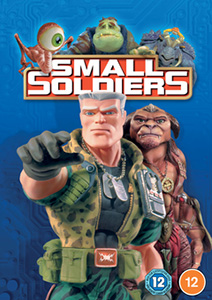 When a toy company gets taken over by a megalomanic new owner, 2 of its employees are tasked with creating a new line of toys that will dominate the market.

Pushed for time and under constant pressure from the new boss, protocols are ignored and state of  the art military computer chips are mistakenly put inside the toys, creating 2 warring factions (the Commando Elite and the Gorgonites) with sentient intelligence.

Meanwhile, Alan Abernathy (Gregory Smith) works at his dads toy store and gets delivery driver Joe (Dick Miller) to drop of a couple of cases of these toys as they make their way to bigger stores before release date.

Alan soon discovers there is more to these toys than first meets the eye, and with the help of his neighbour Christy (Kirsten Dunst), whom he has a big crush on, they must take sides in a battle to defeat these out of control “small soldiers”.

Full of the usual humour, madcap action and pathos that director Joe Dante brings into his movies, Small Soldiers is a very enjoyable action/adventure for all the family, which rewards repeat viewings with lots of hidden details in both set dressing, dialogue, and smart choice of cast members in supporting roles.

The usual trope of family discord being fixed through a common adversary is present and correct, but it is all handed so well and with such an obvious passion for the project shining through onscreen, that any cheesy moments are soon forgotten as another wild and wonderful set piece involving toy-on-toy/toy-on-human battle commences.

A great movie to rewatch anytime and highly recommended if you’ve never seen it before.