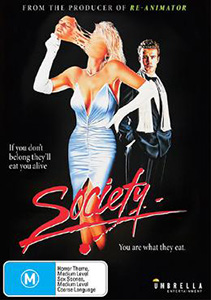 I first watched Society many years ago at ‘Black Sunday’; an all night horror movie festival that was held in Manchester. I still remember the audience reaction at the infamous ‘shunting’ scene…the place went wild! Indeed, all of the make-up effects by Screaming Mad George got a rousing reaction from a caffeine (and booze) fuelled crowd. All these years later, and despite the proliferation of cgi replacing tradition prosthetic make-up effects, Society is still an absolute joy to watch.

Billy (Billy Warlock) is a rich kid living with his family in Beverley Hills, whose sense of fear and paranoia begins to spiral out of control when spotting certain ‘happenings’ to do with his family. This fear is confirmed when he sees what his family and society are really like on the inside…literally! To give any more away would be to spoil the joys of this great movie.

Society is a horror/comedy classic from director Brian Yuzna. Laughs, scares, jumps, and a genuine sense of WTF!? on a first viewing, all make for 99 very enjoyable minutes….including the FULL uncut and uncensored ‘shunting’ scene.

There’s still some 8o’s cheese on show, but it is all covered in a dripping slime and sense of foreboding that has you questioning if you really should be laughing right now, as you are acutely aware that anything could happen next.

If you haven’t watched Society before, then you’re in for an absolute treat. If you have watched it before but still don’t own it, then this cracking release from Umbrella Entertainment awaits you.