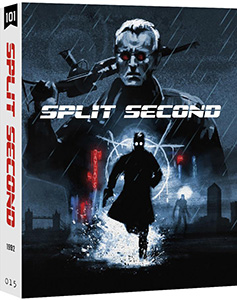 Set in the far-flung future of 2008 (I love rewatching movies where their future is now my past) global warming has raised sea levels and heavy rainfall has meant that wellington boots are the fashion item while out and about in London.

Detective Harley Stone (Rutger Hauer playing his character like a more paranoid Nick Randall from Wanted Dead or Alive) is still traumatised by the death of his partner and is on a personal mission to track and find who (or what!) killed him.

There is a psychic link between Harley and the killer which I won’t give away as to why/how it happened, but this link leads to Harley having infrequent paranoia attacks and raises the stakes as to why one or the other must die.

Harley is paired with a new partner; Detective Dick Durkin (Alastair Duncan playing the part so hammy that he almost sweats gammon) whose overenthusiastic manner and naiveté constantly rubs Harley up the wrong way.

This unlikely pairing must now find the killer before the body count gets even higher.

Split Second is undeniably British, from the late 80s-early 90’s lighting that prevailed in most UK genre movies during that period, to a cast that includes (the sadly no longer with us) Pete Postlethwaite and Ian Dury.

While the production budget isn’t big enough to effectively portray everything onscreen, it still draws you into the wet and grimy London world where seedy nightclubs seem to be the entertainment venue of choice.

The lean 90 minute running time has a fair smattering of thrills throughout, which is also balanced with some not so subtle tongue in cheek humour…Dick Durkin’s name doesn’t go without comment, and Harley has a serious chat with a dog…on more than one occasion.

There is a lot to enjoy with Split Second, including its very quotable dialogue and bizarre moments which don’t lose their charm on multiple viewings. Throw in a fantastic set of special features on this 2 disc limited edition release, along with the best picture and sound quality that I’ve ever watched it with, and this is a title that you should definitely add to your collection.

Another great entry into 101 Films Black Label range of releases.

Review by Dave from discs kindly supplied by 101 Films.

Episode 332 is now online at all the usual places, including our website: 60minuteswith.co.uk/decade-of…Myself & @ThomDownie in the January Decade of Decadence show.#podcast pic.twitter.com/M2e98gPsK5