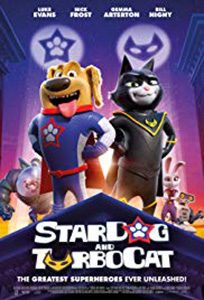 The year is 1969, and faithful dog Buddy (Nick Frost) is sent on a mission to explore the far reaches of space.  During his mission an accident happens, and he is frozen in time for fifty years! Buddy wakes up in the town of Glenfield with no knowledge of what happened or how he got there. Not only must Buddy try to figure out his strange new superpowers, he must also contend with the townsfolk of Glenfield.

Animals are deemed dangerous, and he is constantly pursued by an animal control officer. During Buddy’s’ adventure he meets masked vigilante Felix/TurboCat (Luke Evans). Initially they fight like cat and dog (pun very much intended), but they must learn to work together to overcome the bad guys and save the day.

The plot of StarDog and TurboCat isn’t particularly original, and the main characters are basically Superman and Batman in animal form. StarDog has super strength and can fly, whereas TurboCat has gadgets, a car (which looks like the Batmobile) and a robotic butler called Sinclair (Bill Nighy). Nick Frost, and Luke Evans do a good job of voicing the main characters. The animation is ok however, one of the biggest issues I had with the movie was the town of Glenfield itself. It is essentially empty apart from a series of about six recurring characters. I’m guessing time and budget played a part in this, but it meant I didn’t feel particularly engaged with the movie. I also didn’t fully understand why animals were hated by the few characters that were in the movie. It is set in 2019, so this didn’t make much sense to me. As such, I lost interest after about 30 minutes.

However, as always these are criticisms from an adult, and what really matters are the views from a child’s perspective. As I mentioned before, I have two children aged 7 and 3. They both watched the movie, and I asked them what they thought. In fact, my 7-year-old typed this next section, so she can credit this as her very first movie review. Her quotes were:

It wouldn’t be fair to leave out my 3-year-old, so I asked her what she liked about the film. She said:

StarDog and TurboCat is no challenge whatsoever to anything Disney and Pixar release. I also think it is a strange time to release the movie, especially when Frozen 2 is currently taking over the world. Maybe a summer holidays release would have been better? However, as always it doesn’t really matter what I think. If you have children similar ages to mine, then check out their quotes, because that’s what really matters.

StarDog and TurboCat is in cinemas now.

I love video games and movies as much as I love my children. However, I'd rather face off against the worst end of level boss, and watch the scariest horror movie than visit another soft play! Thanks for taking the time to visit the website and read this review. Please send any complaints to Dave and any money to me!
Signature Entertainment presents The Courier in Cinemas & on Digital HD 20 December Rants R Us: Say Hello you asshat!