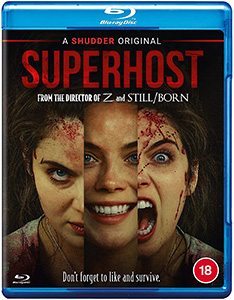 Teddy and Claire (Osric Chau & Sara Canning) are vloggers whose online audience for their show “Superhost” is beginning to decline, and arriving at a remote home owned by Rebecca (Gracie Gillam), they are soon alerted to the fact that all might not be as first seemed, but wanting to spice up the show in an attempt to keep their subscribers, they decide to keep filming despite increasingly bizarre behaviour by their host.

When previous “Superhost” Vera (Barbara Crampton) arrives at the house with accusations and threats, all thoughts of a stress free filming period (which also involves Teddy’s secret plans to ask Claire to marry him) are completely forgotten.

With a cast of only 4 actors, an exceedingly small production crew, and a tight budget, Superhost punches above its weight to deliver an entertaining, humorous and tense 84 minutes that features a standout performance by Gracie Gillam as the titular “Superhost”.

Writer/director (producer, editor AND visual effects person) Brandon Christensen does a great job of using the limited production space to maximum effect, while also creating character arcs that end in a satisfactory way and actually had me caring about them, while the always watchable Barbara Crampton is once again on top form and continues to show that she has no qualms about getting down and dirty in the horror genre…long may she continue to do so.

I’ll not give away any more of the story, but suffice it to say that it ended in a way that has me hoping for a sequel/prequel.

Also, make sure to listen/watch my interview show with Gracie Gillam…there’s no spoilers in it too if you haven’t watched Superhost yet.