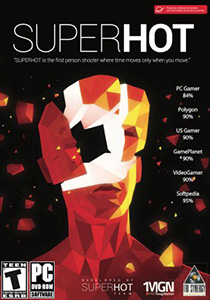 Modern gaming is amazing and I genuinely believe there is something for everyone to enjoy, but I sometimes feel a little jaded especially with the first-person shooter (FPS) genre. These games have been around for years but they have become more and more popular in the HD era of videogames, particularly with the introduction of Call of Duty and Battlefield. Videogames are awash with FPS games and often there is little innovation, meaning things can feel a little stale. That is how I felt until recently and then my world was turned upside down.

What do you get when you cross the subversive violence and addictive gameplay from Hotline Miami with the fiendishly clever puzzles of Portal? The answer to that question dear reader is a wonderful game called Superhot.

I won’t say too much about the story because part of the pleasure of the game is discovering things for yourself. In all honesty not very much is explained to you as you are dropped into scenarios where you are being attacked by multiple enemies. Like most FPS games the aim is to shoot the bad guys but Superhot has a unique gameplay mechanic that makes it stand out from the crowd.

Facing half a dozen enemies is initially quite daunting and then you realise that time only moves when you move! Imagine the bullet time effect from The Matrix and you quickly understand that planning each attack ahead of time is not only essential for survival but also frigging cool!

Even when you are unarmed there are ways to tackle each situation, for example, throwing a bottle at a knife wielding enemy, grabbing the knife from him and stabbing him with it, then throwing the knife at another assailant, stealing their pistol and shooting the rest of the bad guys. Doing this in slow motion and then watching the whole situation play out in real time is incredibly satisfying!

The story in Superhot is approximately 2 hours long and I enjoyed every second of it, even though at times I felt like Psycho Mantis from Metal Gear Solid was messing with my mind!

I’d heard many good things about Superhot prior to playing the game but nothing could have prepared me for just how good it was. Superhot reminds me of a line of dialogue from The Matrix (yes I’m aware this is the second Matrix reference but when you play Superhot you’ll understand where I’m coming from) where Morpheus says to Neo, “unfortunately, no-one can be told what the Matrix is. You have to see it for yourself.” In other words don’t take my word for it, go and play it!

Superhot is the most innovative shooter I’ve played in years! If you’ve already played Superhot you will understand the irony in that statement but it is also undeniably true.

Superhot is available now on Linux, PC, Xbox One and PlayStation 4. You can also download Superhot for free until 15th April 2018, if you are an Xbox Live Gold subscriber.

I love video games and movies as much as I love my children. However, I'd rather face off against the worst end of level boss, and watch the scariest horror movie than visit another soft play! Thanks for taking the time to visit the website and read this review. Please send any complaints to Dave and any money to me!
Soundcheck: Pearl Jam – Ten Review: Lucky