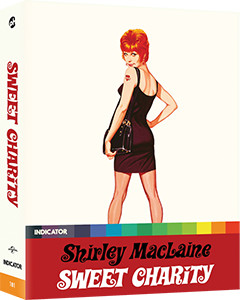 Well you’re going to get a biased review here, because I love a good musical, and Sweet Charity is top 3 for me. The pedigree this film has: directed by Bob Fosse, book by Neil Simon and starring the wonderful Shirley Maclaine, Sweet Charity is an absolute treat. It’s also not your usual boy-meets-girl sort of musical.

Originally directed and choreographed for Broadway by Bob Fosse and starring his wife and muse Gwen Verdon, it’s based on the screenplay for the 1957 Federico Fellini’s wonderful film Nights of Cabiria; the story of a prostitute who has – well a really shit time of it.

Sweet Charity has a ‘hint’ that she may be a sex worker, but under the guise of a dancer for hire at a Tomes Square dance hall.  All she wants is to be loved, but unfortunately the men she meets are all ….disappointing, to put it lightly.

I could run through the story but if you have any love for an off kilter DIFFERENT musical, then this is the one for you. Maclaine is a revelation in this, her bright red hair and lipstick and earrings bouncing along even when the world shits on her from a great height.

The songs! Remember Shirley Bassey singing ‘Big Spender’? Yep, from this film, but this version is more sexual, more seedy, and perverse, much like the dancing. Here Fosse excels, and the standalone dance numbers with no stars, no song sung, work beautifully. It’s so edgy, even now it is thrilling to watch.

Special mention to the amazing sound and picture, this leaps off the screen and coupled with the amazing soundtrack which is so clear and zingy (I’ve been singing ‘If they could see me now’ for days), it’s really been given a spruce up.

Again the extras package is great. In fact the only complaint I have…and it’s a very small one, is the very academic in parts commentary. For such a fizzy colourful film, hearing a terribly factual read out commentary was a bit flat. But I do know how much work goes into this sort of thing so perhaps those commentators meeting on zoom to talk through the film would have been a LOT more entertaining!

An amazing film, that is planted right in 1968 and has stayed there, dated in the BEST way, a triumph, and when she’s marching with a band you’re right there, marching with her. Wonderful.

I used to live in Los Angeles and write about Rock bands. Now I live in wonderful Wales and write about films. I like video games (especially RDR2) and am also a painter...gratuitous plug: follow my art account on Instagram @artbytinar
Review: Junior 10 questions with Najarra Townsend