Unless you are a lion trying a cabbage diet, in which case trying that specific new thing is somewhat ridiculous.

Table of Tales : The Crooked Crown, henceforth shortened to ToT to save my fingers, is a new thing for me, a genre I have not really dabbled in.

So the question is, is it a miserable farting lion or something better like roast beef and vanilla ice cream?

Seriously I tried it once it was okay.

Waffling aside what is ToT? I’m glad you asked, ToT is tactical turn based tabletop themed RPG beamed to your eyes via VR, simple really but it has a very nice visual uniqueness which works very well in VR, especially for a non tactical turn based player such as myself.

The setup for the game is that you find yourself in an attic in front of a strange looking table and a wand in your hand, no euphemisms here please it looks like a wooden crafted PlayStation move controller. You activate the table in front of you and the story begins. The story centres around a group of scoundrels, you start with a group of 4, and an adventure around the Crown Islands. Throughout this story you will encounter twists, turns and choices to make as you make your way through the narrative making friends and enemies along the way.

The table itself is very well presented, it opens up and seemingly fills with water. Up from the water springs a boat where you first meet your scoundrels who will be your characters through the game. As the boat moves the water in the table scrolls across to simulate motion and when land appears it pops up, as if made by building blocks and scrolls as it builds itself, giving the impression of a kind of pop up Lego world on a treadmill in a table. Its a very clever and rather good way of presenting a world held within the confines of a small table, and the way things just appear reminds me of AR but within the confines of VR. 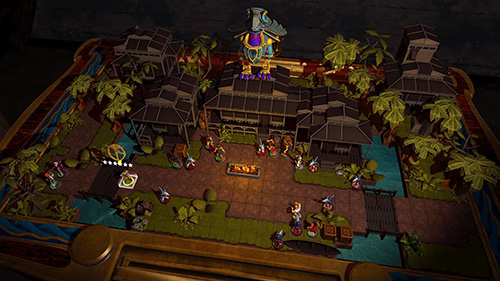 All of the characters are essentially little figurines, complete with little stands, who are animated enough to give some personality. You can pick them up with the wand and examine them closer, put them on a little area at the front of the table to bring up a biography and stats, which is a nice touch, but you will mostly be moving them around the table in front of you during combat and choice making sequences. Presentation wise the game is simple but uses its assets very well to create an experience I have not really had so far in this VR journey.

Presentation wise its good then, so how does it sound? I’ll be honest the music is fairly standard fair and personally not particularly memorable. The sound effects in the game are all present and correct. The voice acting of your characters is all solid and then there is the narrator.

The game does not have a dungeon master as such but what it does have is a narrator in the form of a mechanical bird who flaps around the board throughout the game sometimes near your shoulder, sometimes perching on the board itself. She essentially reads the story to you as you go and also does many of the voices in the cut scenes. She is very good, her voice acting is well done but I did have a couple of issues. I am not sure if her voice is that of a pirate or a cider drinking farmer. Granted there are similarities, but I cant tell which one she is going for. The other problem is the sheer amount of narration involved throughout the game, its constant. Maybe this is what a dungeon master is like but for me it was a little much, but the quality is good. The game could have fallen flat on its face if the performance was not a good standard, as it is she does carry the game along nicely but could do with taking the odd breath.

If you enjoy picking things up you will enjoy ToT. Being a board game you have to manually pick up all of the characters and move them around on your turns. Now for me this involved a lot of reaching around in front of me and having the occasional Playstation move problem, which is on par to most games that use them. That was until I realised, I may have missed the hint earlier, that pressing the move button extends your wand extending you reach across the table and making it a lot easier to pick things up and move them around. But its not all picking things up no, it also has dice rolling and cards to pick up and place on the board.

Gameplay wise what you have here is a branching storyline where you can choose where the story goes, or at least the order you choose to do things, and in amongst the story you have intermittent turn based battles which include cards, dice and as I mentioned tactics.

Tactics make me sweat, I am, personally, as tactical as a sausage.

Each of your scoundrels is a different class with their own strengths and weaknesses and when it comes to fighting it makes sense to use their strengths. You have ranged fighters, close up tank style bruisers, magic healers etc. All the standards. Each of your characters has action points illuminated on the character base and these are used during combat. Each character can move a certain number of squares, yes the table is grid based, as a standard. They can move additional squares but each additional movement will cost you an action point and in turn possibly cost you the ability to use some of your cards. 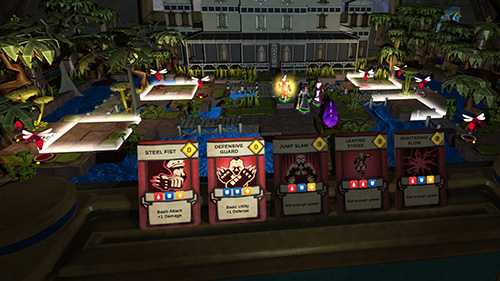 Each character on their move has their own little deck of cards, be it offensive or defensive to play with and each card uses a certain amount of your action points. You can use as many cards as you want in one turn but once your points are gone that characters move is over. Then its on to the next of your scoundrels. Once all of your scoundrels turns are over then all of your enemies on the table take turns, be it just moving or attacking. You do this until you win, hurrah, or lose, boo.
At certain points in the game you are able to level up your characters and gain new cards for their respective decks, you are given a choice of 3 cards per level up of which you can only choose 1. So there is room for customisation of your scoundrels as the story progresses.

During many of the fighting scenarios, and some of the story scenes dice can come into play also. During a fight there may be a ships captain being held hostage by the baddies on the screen. You can choose to free them if you move one of your scoundrels over to them. This will instigate a dice roll where you need to score a certain amount of points on the dice to get them free, the number of points required will vary depending on which scoundrel you have moved over there, breaking chains requires strength for instance. If you get them free then for that fight you will essentially have another character to play with during that fight, which is useful.

Its not just in the fighting either, situations arise where you may need someone more diplomatic to approach a situation, choose the right scoundrel and it may make your life a little less ‘stab stab fireball’. Which again is useful.

As an experience ToT is not huge but it does offer some replay value. What happens if you have a different team of scoundrels? If you went left rather than right at a moment of choice? If you had managed to save that hostage? You can’t see it in one play through, which is around 4 hours or so, so there is a reason to go back.

Unfortunately I didn’t get to try the multiplayer which sees a VR player play as the bad guys and regular flat TV people play as the scoundrels, so I cant comment on that.

I know more about lemurs than I do about tactical turn based RPGs so this was an odd one to play for me, it has just never been a genre I have cared for. But you know what, after my initial reservations, I really wasn’t sure if this was my ‘thing’, I came away having had a nice little time.

ToT is visually interesting, easy enough to get to grips with and has a nice little swashbuckling tale to tell. The VR adds to the atmosphere that you are sat in a dusty attic. But in that attic is some magic, magic with a tale to tell.

Pub Menu Rating: Liver and Bacon.
Review by Adam.
If you want to buy anything reviewed on our site (or anything at all!), then please use the Amazon link provided and help support us with our website and podcast. Thank you.

As I journey through my own existence gaining wrinkles and bad joints, I still love video games, films and music. I've been podcasting for a few years and now here I am writing things. Who would have thunk it? Thanks for reading and check out all our reviews and shows on the site. Treat yourself.
Review: The Big Clock Voodoo Vegas announce new single and details of third album