Review: Tales From the Urban Jungle 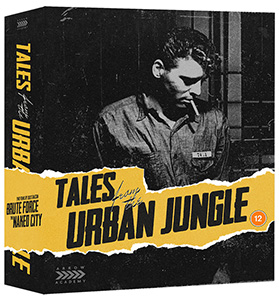 Tales From the Urban Jungle showcases 2 movies from writer, director, producer and actor Jules Dassin, a man who was blacklisted in the communist witch hunts of the House Un-American Activities.

Brute Force stars Burt Lancaster as Joe Collins, a prisoner squeezed into an overcrowded small cell and who has just one desire; to escape from there as soon as possible and to return to his cancer-ridden wife (Ann Blyth), but not before dealing some payback to sadistic warden Captain Munsey (Hume Cronyn) who derives great pleasure from torturing the inmates both physically and mentally.

A crime drama that grips you around the throat from the very beginning with its claustrophobic scenes in the cells,  the mounting tension within the prison is palpable while viewing from the comforts of your own home.

Also in this superbly packed set is The Naked City, where the murder of an ex-model in her bath leads detectives Muldoon (Barry Fitzgerald) and Halloran (Don Taylor) into an investigation that leads them all over New York City to try and solve the mystery of her murder.

While both Fitzgerald and Taylor give great performances, it is the city of New York which is the star of the movie. Expertly captured by director Jules Dassin with cinematography by William H. Daniels, the stark brick and concrete buildings become an almost living and breathing part of the narrative as studio locations are mostly eschewed for filming in the actual locations.

Tales From the Urban Jungle is a great starting point for anyone unfamiliar with the work of Dassin, and is also a must buy for those who have already seen his work. These new 4K restorations, complete with bonus features, take you on an unforgettable journey from the cramped interiors of prison life, through to the open aired majesty of “The Big Apple”, with each stop along the way becoming imprinted in your mind.