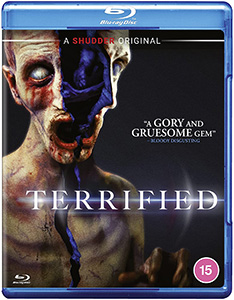 Foreign horror films are far better than most American or British releases…that’s a fact as far as I’m concerned. Hollywood tends to buy these foreign horrors for remakes, and crucifies them (and not in a good way).

Terrified, directed by Argentinian Demián Rugna, is based in the suburbs of Buenos Aires. Just an ordinary street where it seems some of the houses are haunted, or infected, or something…I don’t know but it’s blumming scary.

In one house, Clara can hear strange voices coming from the plughole in her kitchen sink. Her husband Juan thinks she’s bonkers, and being woken by his neighbour banging in the middle of the night, goes out to shout at him, only that banging is coming from his bathroom, where Clara just went to have a shower.  Yes, that banging is Clara’s head getting pummelled ceiling height.

To tell you any more would totally spoil this genuinely unsettling film. How can I explain it? How about David Lynch-lite?

Unexplained death, children coming back to life (ARGHHHHH) and paranormal investiators getting… no no….

If you like horror movies, this is definitely a film for you.

I used to live in Los Angeles and write about Rock bands. Now I live in wonderful Wales and write about films. I like video games (especially RDR2) and am also a painter...gratuitous plug: follow my art account on Instagram @artbytinar
SKAM release new EP ‘Venous’ on the 1st October Review: Evercade Atari Collection 2