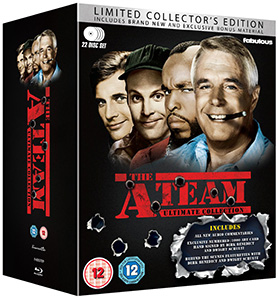 Spread over 22 discs, this great Blu-ray box set from Fabulous Films contains 97 episodes from all 5 seasons of this classic 1980s television show, complete with some highly entertaining new commentary tracks and interviews.

Running from 1983-87, The A-Team told the story of a fictional United States Army Special Forces unit, whose members had been court martialed “for a crime they didn’t commit”.

Their adventures rarely included any overarching stories that carried through across a number of episodes, and were mostly constrained to single episodic narratives that often found them risking their freedom to help ordinary people who were facing adversity.

This often culminated in a big gunfight where:

It was this ridiculousness of course that added to its popularity, as despite the gunfights and fighting, it was all delivered in a way that kept it perfect family entertainment.

With a theme tune that you will never forget once you’ve heard it, the A-Team became embedded into the public consciousness and remains there to this day.

Popular (and often used) phrases such as “I love it when a plan comes together” and “I ain’t getting’ on no plane”, all became a lexicon of the time, with each character having their own particular skills that were showcased during each adventure. Hannibal would disguise himself, Faceman charmed the ladies, B.A. was the muscle, and Murdock was the pilot…and crazy.

Despite being formulaic and predictable in what was going to happen in every episode, The A-Team was FUN, and always guaranteed some laughs with whoever you sat watching it with, and thanks to this great box set, you can now relive those memories once again in glorious high definition, or even introduce the show to people who haven’t seen it before.

The special features are hilarious, with Dwight Schultz and Dirk Benedict giving a highly entertaining commentary about a selection of the episodes.

A fun and enjoyable series that you’ll keep coming back to when you need cheering up.