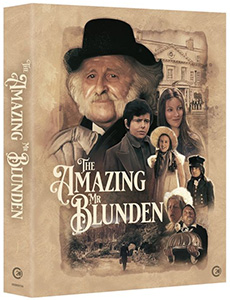 It was several year after its cinematic release that I saw The Amazing Mr Blunden. Definitely on the telly, probably at Christmas, but I have no recollection of when. The only thing I could remember about it was being terrified of Diana Dors’ Mrs Wickens and somewhat confused by Bella (Madeline Smith).

The film begins in 1918, where war widow, Mrs. Allen (Dorothy Alison) and her children, Lucy (Lynne Frederick), Jamie (Garry Miller) and baby Benjamin live in squalor in Camden Town. One night a ‘mysterious’ older man Mr Blunden (Laurence Naismith) visits the family, and telling them he’s a solicitor he invites Mrs Allen to become the housekeeper of the now derelict and razed Langley Park. She takes the job despite the gossip that the place is haunted.

This film is pretty much all over the place and the plot has such gaping holes a 5 year old would notice, but despite this the film does hold together, and is, for me, one of the best ‘Gothic Horrors’ suitable for kids.

It’s not scary in a ghost-way, no its Diana Dors (who was terribly underrated as an actor) who terrifies, along with Madeline as a childlike new bride (I did ponder that if this were made today the character of Bella would be abandoned as her marriage to the Halls owner Uncle Bertie (James Villiers) is tantamount paedophilia).

The story, written by Lionel Jeffreys (who also directed) hot off the Railway Children is firmly part of that 1970s kids film vibe, along with the Railway Children, Chitty Chitty Bang Bang and Willy Wonka. All slightly unhinged and disturbing. Ahhh the good old days.

I would normally give an outline of the story, but I’m not going to, instead I suggest if you have children, plonk them down and let them watch some good old British entertainment, just like we did. If this film passed YOU by as a kid, then get it. You won’t be disappointed.

In some ways I think David Lynch must have seen this at some point. It’s a great package too packed with fascinating special features. As we only have check discs I haven’t seen the book that accompanies the BR, but wish I had!

The Amazing Mr. Blunden is released on December 9th, 2019.

I used to live in Los Angeles and write about Rock bands. Now I live in wonderful Wales and write about films. I like video games (especially RDR2) and am also a painter...gratuitous plug: follow my art account on Instagram @artbytinar
October/November Entertainment Show Lordi release new single and video