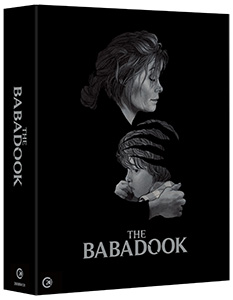 Amelia’s husband dies in the crash that occurs as they race to hospital because she is in labour with Samuel, and now living alone with her son, he starts to display erratic and violent behaviour. Her friends and family think he needs help.

Amelia is worn out, but after a hard day at the nursing home she reads Noah a nightly story. One night Noah produces a new pop-up book, ‘Mister Babadook’.

Looking much like Lon Chaney in ‘London after Midnight’ with a top hat, cape and endless finger talons, the story in the book becomes more threatening, causing Noah to believe the Babadook is under his bed, in his room and will get him.

Second Sights Films new special edition of The Babadook is beautiful. Their special editions all have fantastic covers and packaging, with gorgeous new artwork reflecting the ‘soul’ of each film, and this one is particularly gorgeous.

The extra’s (listed below) all add to this package making the experience of this film more than just watching a movie. Seeing this in 4K is astonishing, as the sound is completely enveloping and the picture with its many darks and hidden corners, shows a lot more “Babadookian’ terror than a ‘normal’ scan.  It also includes the film ‘Monster’ which this film is based around.

The Babadook is now part of the modern classics of horror, and rightly so, but it’s not a straightforward horror film. I think it’s one of the saddest films I’ve seen, examining a mother’s grief and descent into madness, and how her small child is at once terrified, yet filled with love for a mother that could kill him at any point.

You can make your own mind up if the Babadook is real or not. The one thing I love about the Babdook is its disguised ‘happy ending’, the festering beast now controlled in the basement, but what if he escapes?

A wonderful film on so many levels, and another carefully curated and amazing special edition from Second Sight Films.

The Babadook is released on 26th July 2021 and is available to pre-order.

I used to live in Los Angeles and write about Rock bands. Now I live in wonderful Wales and write about films. I like video games (especially RDR2) and am also a painter...gratuitous plug: follow my art account on Instagram @artbytinar
‘Just Die Already’ Launches Free PvP Update Today! June 2021 Decade of Decadence