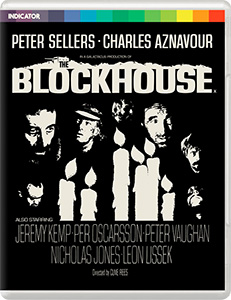 Based on real events (that were then turned into a 1955 novel by Jean-Paul Clébert), The Blockhouse is a stark look at our own frailties, while also showing our inbuilt will to survive, no matter what we have to endure.

After an explosive Allied air raid on a Nazi prison camp in 1944, six escaped prisoners take shelter in an underground blockhouse, whose exits are then blocked by falling masonry, leaving all six men trapped inside.

Thankfully for them it is an underground storage area, well stocked with food, wine, and candles.

The men gorge themselves on everything, this new found “freedom”, accompanied by a seemingly endless supply of food and wine (especially wine!) which they devour with great satisfaction.

It is when the days turn to weeks, the weeks turn into months, and eventually the months turning into years, that the mens physical and mental health begins to deteriorate. Turning on one another as emotions are worn as thin as their supply of candles, and along with it the thought of being engulfed in complete darkness for the rest of their days.

The Blockhouse is a tough watch in many ways, slivers of joy amongst the men being offset by long periods where the viewer is left to witness loneliness, despair, and suffering. The minimal light from the candles making the atmosphere gloomy and making you focus even more on the shadowy figures as they try their best to survive, each of them dealing with the situation in their own way.

The narrative is pretty much this: six men talk to each other while guzzling wine and slowly get more and more depressed…definitely not a lighthearted weekend evening viewing!

The ending truly shocked me (especially as this is based on a true story) and left me with chills as the final scroll of text left the screen. It still plays on my mind days after watching it.

While Peter Sellers and Charles Aznavour are high on the billing, this is definitely an ensemble piece, each actor getting their own fair share of screen time…though often that amounts to nothing more than them sitting in the dark reflecting on what they are going through.

Slow paced and set in a dark dank location, I wouldn’t call this an “enjoyable” movie, more of “an experience”.

If it’s an experience you’d like to take, then this world premiere blu-ray release is out on 17th January 2022.

Definitely don’t watch if you suffer from claustrophobia!