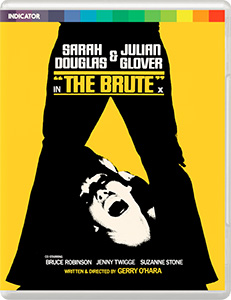 Diane (Sarah Douglas) is a glamorous fashion model who’s unfortunately in an emotionally and physically abusive marriage to her husband Teddy (Julian Glover), and after yet another violent attack, she walks out of the family home to stay with photographer friend Mark (Bruce Robinson) and his girlfriend Carrie (Suzanne Stone).

Diane eventually finds comfort with other beaten and abused wives at a nearby women’s refuge and starts to make plans for a new life. However, Teddy has other plans for her and he aims to see them through to fruition.

The Brute is often a tough watch, as it doesn’t shy away from the physical and verbal abuse given out by more than one male character in the movie, lingering on beatings with a belt, or slowly moving into a branding iron in the fire that Teddy plans to…well, I’m sure you can work that one out for yourself.

Tonally it shifts between being a domestic kitchen sink drama, through to moments of almost software pornography, then to sheer horror as the antagonistic male characters hunt down their female prey. No wonder it was given an “X” certificate upon its original UK cinema release.

Covering a subject that is still unfortunately prevalent across the world, The Brute will linger long in the memory once the end credits have rolled.

Unseen since the early days of VHS, The Brute now returns in a worldwide Blu-ray premiere.