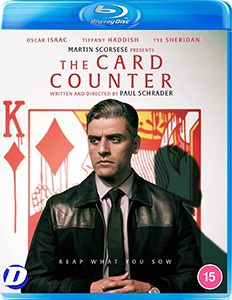 Writer/director Paul Schrader brings to the screen a slow burn tale of William Tell (Oscar Isaac), a man who just wants to travel around the U.S.A. and play cards after his former life landed him behind bars for 8 and a half years.

During his travels he crosses paths with Cirk (Tye Sheridan), a troubled young man loaded with excessive emotional baggage, and La Linda (Tiffany Haddish), a highly focused woman who is building a stable of card players.

Their 3 paths intertwine in an effort to help each other out, but the threads holding them together soon begin to unravel.

The Card Counter takes its time to forward the narrative, each scene playing out in a slow and measured manner and usually involving Isaac and Sheridan sat in a casino/motel/eatery talking to each other over glasses of Jack Daniels, often going over similar themes from their previous conversations.

We see William Tell play cards…a lot of cards. Yet bafflingly it’s poker that takes centre stage despite an initial explanation (and the title of the movie) from Tell about how card counting works when playing blackjack.

The card games themselves come nowhere near creating the sense of tension as experienced when watching Casino Royale, while the slow burn narrative becomes so slow at times that it almost extinguishes itself.

While the acting, locations, and cinematography (especially the warped and disorienting shots used when looking into Tell’s past) are all visually stimulating, it is the long drawn out (111 minutes) narrative that ultimately fizzles and splutters rather than sizzling and exploding, that left me feeling that I’d rather have spent my time actually playing cards.

One for Schrader completists.

Review by Dave from a disc kindly supplied by Dazzler Media via The Warrior Agency.