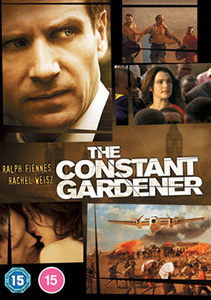 The Constant Gardener, based on John le Carré’s 2001 novel of the same name, is one of those ‘well made’ British films, starring really good actors that tell a solid story about a terrible wrong that is eventually righted.

Told partly in flashback, Justin Quayle (Ralph Fiennes) is a shy, quiet British diplomat in Kenya, he’s married to Tessa (Rachel Weisz), an Amnesty activist who is brutally murdered for an unknown reason.

His collegue (Danny Houston) tries to persuade him she was having an affair with fellow activist and doctor Bluhm, which isn’t true, they are in fact investigating a pharmaceutical company.

The whole premise of the film is that Justin tends his plants (hence the title) but in fact this quite important part of the book –nature, nurture etc… is largely missing from the film, which in fact is really a Hollywood thriller. But unlike most Hollywood thrillers this has a bravely nihilistic ending.

Great performances, good story, but nevertheless one of those ‘Thursday night films’.

I used to live in Los Angeles and write about Rock bands. Now I live in wonderful Wales and write about films. I like video games (especially RDR2) and am also a painter...gratuitous plug: follow my art account on Instagram @artbytinar
Soundcheck ’em out: Kill the Ideal, Motorjesus, Temple Balls ‘Reunion’ a chilling modern gothic thriller – on digital 22 March 2021