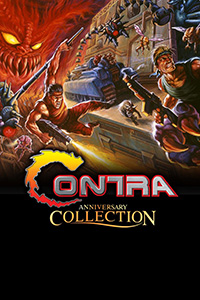 Let me make things clear from the start of this review. Konami are responsible for making some of my all-time favourite video games! My childhood was filled with days playing titles such as Batman Returns, Green Beret, TMNT: Turtles in Time, and Sunset Riders to name a few. Let’s be honest, I could list dozens of other games that I spent hours playing, and as a result I still always smile whenever I see the Konami logo. As I got older, I appreciated Konami more and more with PlayStation classics like Metal Gear Solid and Silent Hill.

I have some history with the Contra series and I’m old enough to remember when it was called Gryzor on the ZX Spectrum. I’ve played a few of the Contra games, but not all. So, I thought it would be a good idea to write a mini review of each game included with this superb collection.

The game where it all started and spawned multiple sequels and variations of the original. Contra is a run and gun shooter where you can play on your own or with a friend. The heroes, Bill and Lance, may as well be called Sly and Arnie as they closely resemble Sylvester Stallone and Arnold Schwarzenegger on the box art. As well as using the likeness of Sly and Arnie, the enemies seem to be taken directly from the movie Alien. There would be lawsuits flying around the place if this kind of thing happened today! You can run, jump and shoot in different directions as you are constantly assaulted by a steady stream of enemies. There is some variety with pseudo 3D sections where you run into the screen to get to the end of level boss. As with all the Contra games, don’t expect an easy ride. I got to the second boss before I lost all my credits. The graphics are decent and detailed, and it has a classic theme tune.

The thing that immediately struck me when I played Super Contra was how much the graphics had improved compared to the original. This is even more impressive considering the sequel came out just one year after the original. It just goes to show how quickly technology can move on, even in such a short space of time. The sequel introduces basic cutscenes and also offers more variety and colour with the stages and enemies. Super Contra seemed tougher than Contra and I didn’t make it to the end boss on my first playthrough. As with the first game, I appreciated and enjoyed how the arcade games booted up as if they were being turned on for the first time.

This is a top-notch arcade conversion of the arcade game with pretty much everything intact. The music is excellent, and the graphics closely resemble the original. I imagine that you would have been an extremely proud NES owner had you owned this game when it was originally released.

Once again this is an arcade conversion of the original, however it does differ slightly to the NES version. It has a cool intro sequence of an asteroid hitting earth and features our two heroes before they enter battle. There is also a map at the beginning of the game that shows your objectives. This is essentially the same game as the NES version with some slight refinements.

Super C is the home conversion of the arcade sequel Super Contra. This is where the NES starts to show its limitations, as it can’t compete with the arcade version. For a start the graphics look a lot cruder than the arcade. Although it still technically plays the same it isn’t as nice to look at. Whereas the NES version of Contra was an excellent port of the arcade, this looks dated in comparison. It’s still fun game, but I’d much rather play the arcade version.

Now we’re talking! This is where my love for Contra really started. I was a proud owner of a Super Nintendo back in 1993 and Contra 3 (also known as Super Probotector) was my real introduction to Contra games. It features an excellent intro, beautiful colourful graphics, superb music, and kickass gameplay. The levels are full of variety to keep you entertained and I doubt very much you will get bored. There is also some excellent use of the brilliant Mode 7 3D effects that only the Super Nintendo could do. You can also hold two different weapons which helps a lot as the game is as tough as they come. Contra 3 really is an excellent game and still a lot of fun to play today. The only thing that lets it down slightly are the strange top-down levels where you use the triggers to control your turning motion. These levels are a decent showcase for the Mode 7 graphics but ultimately, they aren’t that fun to play. Other than that, this is a wonderful game that stands the test of time.

This was a brand-new version of Contra for the Gameboy, which has the music intact and the overall gameplay of the originals. Obviously playing on a big screen with Gameboy visuals isn’t ideal, but it doesn’t take away from the fact that this is still very playable game of Contra.

I never played this version of Contra before even though I had heard good things. I was keen to try it and wasn’t left disappointed. One of the main differences with this version of Contra compared to the other games is you can now pick from four different characters. These are humans, Ray Poward, Sheena Etranzi, wolf-like humanoid Brad Fang (great name), and a robot called Browny (not a great name). There doesn’t appear to be any real difference between the characters, apart from the robot who is smaller and also has a double jump. They do however have different weapons which are unique to each character. This is a nice touch and adds some variety so you can pick your favourite hero. The other thing which impressed me was the ability to pick branching paths in the story. This is excellent as it gives you the opportunity to replay the game. The other thing I noticed were the number of explosions on screen in the game. I know it’s an action game, but it felt like a firework show at times! Contra: Hard Corps is very similar to Contra 3, except you can tell it is a Megadrive game. What I mean by that is that the graphics never seemed as good as they did on the Super Nintendo. It’s not to say that they’re bad, but you can definitely tell the difference, especially if you were lucky enough to own both systems. Contra: Hard Corps is an excellent addition to the series, and I’m really pleased that I’ve finally had the chance to play it.

This is the game I fell in love with back in 1993, and I still love it! Included is the original 50hz or the “turbo” 60hz version of the game. I would have only had access to the 50hz version when I was a kid, so for research purposes, I tried both. The 60hz version plays like lightning and is a big difference compared to the 50hz game. The other changes from Contra 3 are the main characters and enemies. Now the heroes are robots, as are a lot of the enemies. I always thought that this was because Nintendo had strict rules on video game violence and they felt that European audience couldn’t cope with humans being killed. To be honest, I think I actually prefer this version over the characters in Contra 3, as playing with robots is always cool!

This is essentially the European version of Contra: Hard Corps. Again, you are offered the opportunity to play with 50hz or 60hz. As with the difference between Contra 3: The Alien Wars and Super Probotector, the main characters have been changed to robots. This is an odd choice as one of the characters was a robot anyway, so you are essentially picking four robots which all look very similar. Because of this major change, I actually prefer Contra: Hard Corps over this version.

As well as the above games, there is a digital bonus book which features information on each game. Included are interviews with key figures including producer of numerous Contra games Nobuya Nakazato, and Tom DuBois who was responsible for some of the box art for the games. There are also some exclusive features which I’m sure fans of the Contra series will love.

And if that wasn’t enough, there are Japanese versions of the following games:

Each game offers save states, so you can save the game wherever you want and pick up where you left off. This is extremely helpful as the games can tax even the most skilled players. You can change the display settings of each game to feature the original graphics, or tweak them slightly to include a pixel perfect version, or add scanlines. There are also different backgrounds to choose.

Overall the Contra Anniversary Collection is an excellent series of games and kudos to Konami for releasing them. Although Konami’s recent output into the video game world may have slowed down, they still have a rich history of games that are extremely playable and relevant today. I for one would love to see more of these collections released by Konami.

The Contra Anniversary Collection is available now for PS4, Xbox One, Nintendo Switch, and PC.

Review by Chris from review code kindly supplied by Ready 10 Media.
If you want to buy anything reviewed on our site (or anything at all!), then please use the Amazon link provided and help support us with our website and podcast. Thank you.

I love video games and movies as much as I love my children. However, I'd rather face off against the worst end of level boss, and watch the scariest horror movie than visit another soft play! Thanks for taking the time to visit the website and read this review. Please send any complaints to Dave and any money to me!
Interview: The return of John Robertson ‘Cold’ release thought provoking lyric video with anti-bullying message for new single “Shine”