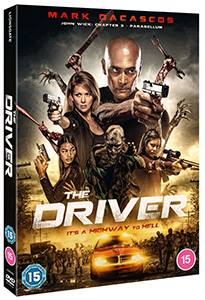 Set in the aftermath of a zombie apocalypse, The Driver follows the titular “driver” (Mark Dacascos) as his hitherto quiet existence in a survivalists compound is shattered when the base is attacked, which summons a swarm of zombies (all of whom react only to sounds) that go on a killing rampage.

Escaping the compound with his daughter (real life daughter Noelani Dacascos), he must train her to survive as they make their way to “Haven”, a rumoured sanctuary up North.

The Driver is aptly named as there is a lot of driving in this movie, most of it set against a bad green screen effect which ruins the illusion of travelling anywhere at all. These interior car shots with the driver and his daughter take up a fair chunk of the running time, and while it is nice to see the real life father/daughter chemistry between Dacascos and his daughter, the scenes themselves certainly drag out the running time.

The zombies are not well realised and their make-up effects look bargain shop halloween at best, so any fear of is diluted as people run and scream away from them.

Dacascos is the highlight of the movie and we get to see him do a little gunplay and fist fighting, but overall his part is watered down to chatting with his daughter and driving a lot.

This is one for zombie completists only.

The Driver is on Digital Download 12 October and 19 October from Lionsgate UK.

Review by Dave from an online screening link kindly supplied by Lionsgate UK via Witchfinder PR.