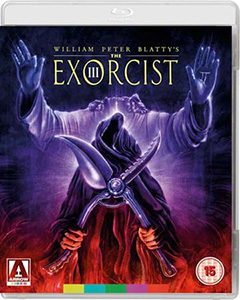 Set 17 years after the original film, it follows a character from the first film: Lieutenant Kinderman. Kinderman is investigating a series of murders in the area, and it appears that they have a copycat serial killer on their hands of someone Kinderman sent to the electric chair years ago: the Gemini Killer.

The Exorcist III is an odd film, with a weird ‘add-on’ exorcism near the end (you can’t call a film Exorcist 3 with NO exorcism can you?). However it came to light that the film Morgan Creek released, was NOT Blatty’s vision or story, and that the exorcism WAS forced onto him by the studio.

This package includes the cinema version of the film with the daft add on exorcism and Jason Miller reprising his role as Father Karras, but it also has the director’s cut, which doesn’t feature the exorcism OR Jason Miller, but has more Brad Dourif and I much prefer it. It turns it into a more considered, spiritual and questioning narrative.

One major addition and perhaps the big selling point is the inclusion of a commentary on the director’s cut by Kim Newman and Mark Kermode. This is such an entertainingly wonderful addition it’s worth the price of the disc for this alone. Both Mark and Kim do a fabulous job of opening up the whole making of the film, stories, everything. One of the best commentaries I’ve heard. But then there isn’t much Kermode doesn’t know about these films!

The film looks great, and you can forgive the grainy bits in the director’s cut as it’s a miracle they survived!

DISC ONE – THE THEATRICAL CUT

– Chapter One: A “Wonderful” Time, an interview with producer Carter DeHaven and members of the supporting cast and production crew

– Chapter Two: Signs of the Gemini, an interview with actor Brad Dourif

– Chapter Three: The Devil in the Details, an interview with production designer Leslie Dilley and more

– Chapter Five: All this Bleeding, interviews about the additional shoot and special effects

I used to live in Los Angeles and write about Rock bands. Now I live in wonderful Wales and write about films. I like video games (especially RDR2) and am also a painter...gratuitous plug: follow my art account on Instagram @artbytinar
Review: Birdy Spotlight Reflection: Return of the Living Dead