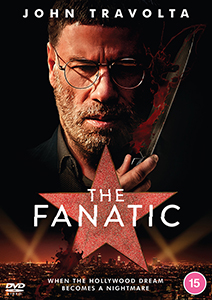 Moose (John Travolta) is a movie fanatic who is obsessed with the actor Hunter Dunbar (Devon Sawa). So when Moose hears that Hunter is doing a signing session at a local shop, he is ecstatic at the thought of finally meeting him in person and getting an autograph.

Unfortunately for Moose things don’t go as planned and he misses out on getting his precious autograph, but he does get to briefly meet his hero, albeit not in the way that he wanted to.

An initially innocent verbal exchange at the rear of the shop soon escalates and is just the beginning of a wild cinematic ride of people dying, horrendous injuries, a cockney accent that makes Dick Van Dyke’s chimney sweep seem positively award winning, and is all prefaced by Travolta’s first line in the movie of “I can’t talk too long, I gotta poo”.

Moose is on the autistic spectrum and Travolta looks, sounds and acts like you’ve never seen him before. It would be all too easy to giggle at his character (especially after that opening line), but we can all relate to chasing a dream that seems within our grasp but is then repeatedly snatched away from us by the actions of others.

Yes The Fanatic is silly (VERY silly at times) and writer/director (and Limp Bizkit frontman) Fred Durst putting in a scene where Hunter tells his son how awesome the music of Limp Bizkit is has me in hysterics every time.

However, for every asinine action by any of the characters which has you scratching your head and thinking WTF!?, it is also peppered (albeit very lightly) with genuinely touching moments which elicits empathy for them.

There is so much to say (and enjoy) about The Fanatic that myself, Tina, and Thom recorded a show all about it. That show shouldn’t be used in lieu of reading this review, but is definitely worth listening to when you have finally watched the movie.

Like every movie ever made The Fanatic is not going to be to everyones taste, but if you like snacking on the crazier side of cinema, then this could well have you coming back for another bite.

I personally love watching this and can see it becoming a favourite to put on with a group of likeminded friends around the house, and while I could say much more about this weird and wonderful movie, “I can’t write too long, I gotta poo”.