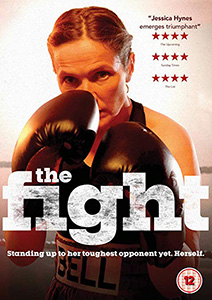 Jessica Hynes is the writer, director, and lead actor in ‘The Fight’, which follows working mum of 3 Tina (Hynes), as she faces the day to day stresses and strains of keeping her marriage and family together, all while trying to cope with mental scars from her past that refuse to go away.

Tina and her husband Mick (Shaun Parks) are a couple whose lives only intersect during fleeting moments each day. Tina works day shifts at an old peoples care home, while Mick works through the night at a job where his work colleagues jokingly make comments about his ethnicity.

Both take their turn to look after their 3 children, which comes to a head when their eldest child Emma (Sennia Nanua) is caught sneaking home from school early by Mick and confesses to her dad that she is being bullied at school by fellow pupil Jordan (Liv Hill).

This opens up a traumatic time from Tina’s past, and one which she is already trying to come to terms with through listening to mindfulness talks on her headphones while working, and also taking ‘boxercise’ lessons in order to vent her pent up feelings of frustration and a way to keep her anger under control.

This mixture of frustration, fear, and unresolved moments from her past, lead her to start trying to fight properly in the boxing ring as a way of redemption for those lost moments that she wants to atone for.

With her father moving into the family home to escape her mother who is on the verge of having a nervous breakdown, a daughter being bullied by the daughter of someone whom Tina has a history with, her marriage being strained to its limits with work and family commitments, can Tina’s mental fragility be strengthened within the boxing ring, or will everything unfurl out of control as it did in her youth?

Despite the title and the DVD cover, The Fight is not about boxing. In fact, there is hardly any fighting in it at all. ‘The Fight’ that runs throughout all of the 90 minute running time is with Tina and her thought processes, as she constantly tries to keep on an even keel, despite all that is happening around her, and the memories from her past that are rising to the surface.

Great performances across the entire cast draw you into the narrative and put you into the shoes of a woman whose life is seemingly far from in her control, except for when she is in the boxing ring…and even then she can be prone to lose that control.

Those going into The Fight expecting either a female version of Rocky or a British Female Fight Club, will be sorely disappointed.

However, if you want to spend some time with characters who elicit genuine empathy for them, while also seeing how 1 person can completely destroy another persons future through their own thoughtless actions, then there is a lot to take away from watching The Fight.

If that isn’t what you were looking for and were expecting 2 females knocking the crap out of each other, then can a point you in the direction of Catfight…which also contains some great social commentary too.