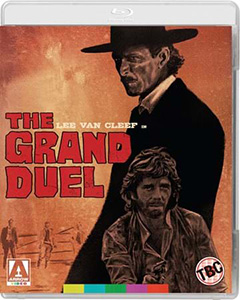 The Grand Duel (Il Grande Duello),  directed by Giancarlo Santi (who had previously worked as Sergio Leone’s assistant director on The Good, the Bad and the Ugly and Once Upon a Time in the West), is a quirky, little known Spaghetti western, boasting the usual multi-national cast (German, American, Spanish, Italian) and an infamous film score later used in Quentin Tarantino‘s film Kill Bill: Volume 1.

The Grand Duelis markedly different from most Italian Westerns, it’s a film that you have to concentrate on to know what exactly is going on.

Dressed all in black, the always magnificent Lee Van Cleef stars as sheriff Clayton who is apparently seeking the man responsible for a corrupt politician, Ebenezer Saxon’s murder.

For some unknown reason, when Clayton and a gang of bounty hunters find the man, Philip Wermeer, in hiding, he protects him from the bounty hunters and allows him to escape.

A chase ensues, ending up with the bounty hunters, Clayton and Wermeer in the town that Saxon ruled. The two men must face off Saxon’s three sons David, Eli (who is that town’s sheriff) and Adam.

This is a very convoluted story, involving arranged marriage, hidden silver, murder and redemption, and probably has one of the most involved and complicated storylines I have ever seen in a film of this genre. It could be compared to an existential Giallo, rather than the usual straightforward Good Vs Evil Western.

As regular readers know, Westerns are my favourite genre, so watching this for the first time was a real treat for me, even more so as it’s such a surprise sidestep of a story.

Great addition to anyone’s Western collection and another fab package from Arrow Films.

I used to live in Los Angeles and write about Rock bands. Now I live in wonderful Wales and write about films. I like video games (especially RDR2) and am also a painter...gratuitous plug: follow my art account on Instagram @artbytinar
Review: Howling III: The Marsupials Review: Spider-Man