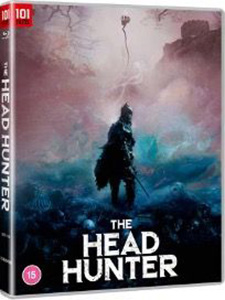 Before watching The Head Hunter I read a few reviews of this independent ‘made on a low budget’ shortish film. Clocking in at 70 minutes, a lot of comments by viewers can be condensed into ‘It’s a bit too long’ and ‘it needs to be 30 minutes long’.

Hmmm I thought, this does not bode well. A short film, needs to be shorter?

The story follows a warrior, who mourning the loss of his small daughter, makes healing potions, looks really rather wonderful in leather armour, and goes off on his trusty steed when he hears the horn blow warning of an attack on the nearby castle.

He returns with a monster head in a cloth bag which he hangs on the wall (The Head Hunter) and some sort of horrific injury which he heals with his potent self-made gunk.

Christopher Rygh gives a truly beautiful performance as a lonely revenge driven Nordic warrior, his performance lifts the story out of pure fantasy and makes it like a live folk tale were past ancestors would chop up unknown creatures and boil them into potions. The warrior talks to his daughter’s grave, repairs his armour, we see his day to day life, and see him do this for much of the film, which I found it an enthralling watch.

One day the monster responsible for his child’s death returns and the warrior travels far to kill it. Returning home, he has revenged his daughter and at last can stop.

However his healing potion gets knocked over, and lands on the head of the beast who killed his child.

It’s only here that I would have cut maybe 5 minutes out of this film as the ensuing chase seems to be purposely longer to fill a bit of time. There are so many influences on this story, the look of it is straight out of the game Skyrim, as is the music. The story is also like some Viking mash up side quest of The Witcher, and it looks wonderful.

I could quite happily watch it again today! I am looking forward to seeing what Jordan Downy does next.

I used to live in Los Angeles and write about Rock bands. Now I live in wonderful Wales and write about films. I like video games (especially RDR2) and am also a painter...gratuitous plug: follow my art account on Instagram @artbytinar
Review: Creed – Rise to Glory BROTHER AGAINST BROTHER : self-titled debut album by Brazilian vocal duo NANDO FERNANDES / RENAN ZONTA