Review: The House That Dripped Blood 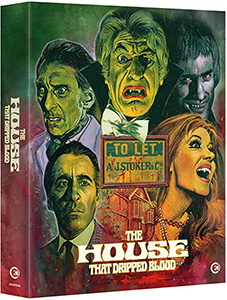 Amicus portmanteau movies were a staple part of my horror viewing while I was growing up, so it was great to see this fantastic Blu-ray release of The House That Dripped Blood by Second Sight Films drop through the letterbox here at 60MW Towers.

Written by renowned screenwriter Robert Bloch, and helmed by Peter Duffell (in his feature film debut), The House That Dripped Blood also drips gothic atmosphere, goosebump inducing chills, and a smattering of tongue in cheek humour.

Spanning 4 short stories, with a framing device of Scotland Yard’s Inspector Holloway (John Bennett) investigating an old mansion which has a mysterious history of the strange deaths of it’s previous inhabitants, The House That Dripped Blood gives twists and turns throughout its entire 102 minute running time.

‘Method For Murder’ has Denholm Elliott as a horror author whose lead character in his latest novel begins to cause more mayhem off the page than on it.

‘Waxworks’ sees the great Peter Cushing and Joss Ackland become obsessed with a female waxwork figure in a macabre museum. Surely it can’t be a woman they know?

Yet another horror icon appears in ‘Sweets to the Sweet’, as Christopher Lee stars as a widower who seems to be treating his daughter too harshly, and when a well-meaning teacher intervenes, she soon begins to regret her actions.

The final story (and my favourite throughout all of the years since I first watched The House That Dripped Blood) is ‘The Cloak’.

Jon Pertwee is a temperamental horror film actor who strives for authenticity in all of his roles, but he gets more than he bargained for after purchasing a strange cloak from a local store.

As always with portmanteau movies, the less you know going into them, the better the inevitable surprise at the end of each story.

All four stories here are highly entertaining, and the framing story has you guessing until the very end too.

It was an absolute treat to see The House That Dripped Blood with the best picture and sound that I’ve experienced in all my years of watching it. Plus a superb set of special features rounds off a truly ‘must buy’ purchase.

Soundcheck: The Seahorses – Do It Yourself Review: Asylum: