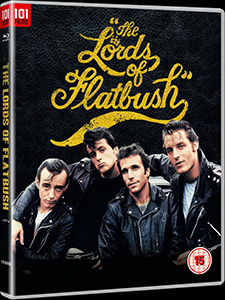 Before Sylvester Stallone was “Rocky”, and before Henry Winkler was “Fonzie”, they were Stanley Rosiello and Butchey Weinstein; 2 members of “The Lords of Flatbush”: a gang of Brooklyn teenagers who spend their time chasing girls, playing pool, and hanging out at a local malt shop.

The gang is completed by David ‘Chico’ Tyrell (Perry King) and Wimpy Murgalo (Paul Mace), though it is the characters of Stanley and Chico who get the majority of the screen time.

Stanley finds out that his girlfriend Frannie (Maria Smith) is pregnant, but wants nothing to do with being a father, while Chico wants classmate Jane (Susan Blakely) to take him more seriously and be in a relationship with him. Butchey has the brains in the gang, but wastes his time wisecracking with the others, while Wimpy just seems to go with whatever everyone else is doing, and is constantly trying to impress his manliness onto others in an attempt to dispel their thoughts on his diminutive size.

Like most high school movies made in the 1970’s, the teenage kids are played by people in their mid to late 20’s. Some even look in their 30s. This is a little distracting at first, but seeing as not too many scenes are set within the school, this soon becomes a moot point and you view them as older characters as their antics continue.

The Lords of Flatbush progresses almost like a stage play, with long dialogue scenes playing out in either the malt shop, or a store. The dialogue is naturalistic, with (I presume) improvised lines often overlapping each other as each actor throws in their own individual nuances to their character. This sometimes leads to the odd instance of “what did they say?“, as 3 people talk at the same time. Though it doesn’t really make a huge difference if the odd line is missed, as this doesn’t really follow a traditional narrative curve, and instead gives another of those “slice of life” insights into characters, where there is no real character development or narrative conclusion, more of a fly on the wall peek into what is happening with people at a certain point in their lifetime.

Sylvester Stallone once again sings on camera (or should that be “sings” on camera?) as the gang break into an a cappella moment while hanging around the malt shop. While not quite as epic a moment as him singing “Drinkenstein” in Rhinestone, it still had me replaying it numerous times to let the full effect truly soak in.

Well worth the time to take a little trip down 1950s Brooklyn as 4 “young” men attempt to find out where they fit into the world.

Released on Blu-ray for the first time in the UK, this is another great release from 101 Films.