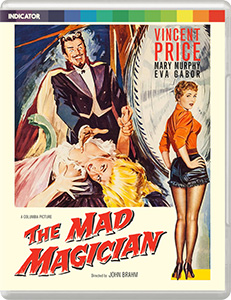 Don Gallico (Vincent Price) designs elaborate magical illusions, which are then passed on by his employer Mr Ormond to various magicians, the main beneficiary being Ormand’s business partner The Great Rinaldi (John Emery).

As well as designing the illusions, Gallico is also a master of disguise, creating face masks that Ethan Hunt would be proud of. These of course come to be used for nefarious means later down the line.

Upon wanting to start his own career as a magician under the name Gallico the Great (they all seem to want “great” in their names…no shy magicians here!), Gallico’s dreams are shattered when Ormond informs him that due to an exclusive contract that was signed a long time ago, HE owns the rights to everything that Gallico creates.

So a pissed off Gallico, who can make dangerous illusions and realistic face masks, sets out on a journey of revenge against all involved.

The Mad Magician features a great performance by Vincent Price, who dials back a few notches from his sometimes over the top acting style. His screen presence however is just as magnetic, and despite knowing where the narrative will end, he draws you into it with each line of his perfectly enunciated lines of dialogue.

Some of the inevitable deaths, while not overly gratuitous in what they show, are still quite shocking for what they imply. All accompanied by an ever more manic Gallico who finds himself in a situation that is spiralling out of his control.

Despite only having a 72 minute running time, The Mad Magician packs a lot into it, each scene revelling in its own absurdity as yet another person has to succumb to the crazed doings of the titular mad magician.

Never dull, always entertaining, this also has the added bonus of having the 3D version included too. So if you want to really immerse yourself into its world, then prepare for Gallico to be in yet another dimension.

The usual addition of great (see what I did there!?) special features on this Indicator release, add another layer of enjoyment to this magical mystery tour that comes to a shocking end.