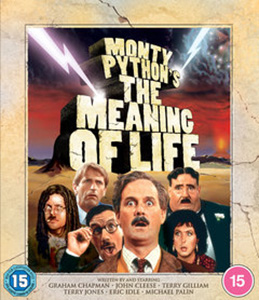 Monty Python’s final feature film is essentially a series of extended comedy sketches based around the theme of “The Meaning of Life”, covering everything from birth, sex, war, food, and ultimately our final demise as the Grim Reaper comes for us…at a dinner party…never use canned fish!

Much like the Monty Python TV show, some sections hit the mark better than others, but even in its “weaker” moments I still find myself giggling, on this my umpteenth viewing of it.

There are the memorable moments which everyone who has seen the film talks about: Mr Creosote having a meal, sex education class, the “Every Sperm is Sacred” song and dance number, but in amongst those are also many more very clever, and very funny, surreal looks at what it means to be alive.

If you’ve never been a fan of Monty Python, then there is nothing here that would change your mind (unlike the more narrative driven ‘The Holy Grail’ and ‘The Life of Brian’), but for everyone else this is Python being Python…and for me that’s always a good thing.

The Meaning of Life is released 28th September 2020.

Interview: “The Deep Ones” Review: The Allergies – Get Yourself Some / I’m On It