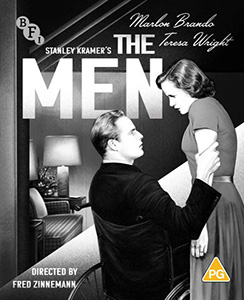 During World War II, U.S. Lieutenant  Wilocek (Marlon Brando in his first cinema role) is shot in the back, severing his spinal cord. We next see him alone in his own room, away from the other injured soldiers in a VA hospital and refusing to see his fiancé Ellen (Theresa Wright). Cared for by ‘firm but fair’ Doctor Brock (Everrett Sloane), the story follows Wilocek and his pals as they navigate disability…Hollywood style.

Although The Men isn’t a hard-core look at war and disability, it’s a very interesting film. Brando spent a month in bed at the Birmingham Army paraplegic hospital, and director Fred Zinneman used real nurses and real disabled war veterans as Brando’s co-stars, most notably Arthur Jurado who became disabled when his plane was shot down during WW2. This film was also banned in the UK because there is a discussion near the beginning where Dr Brock tells a room full of ladies that their men may not be able to father children.

Renowned for his method acting, there’s no sign of it from Brando in this performance, and it’s pretty run-of-the-mill acting with none of the emotional fireworks you’d expect from an early Brando performance (I think he was saving it up for A Streetcar Named Desire the following year).

I used to live in Los Angeles and write about Rock bands. Now I live in wonderful Wales and write about films. I like video games (especially RDR2) and am also a painter...gratuitous plug: follow my art account on Instagram @artbytinar
Review: Andro Dunos 2 March/April 2022 Entertainment Show