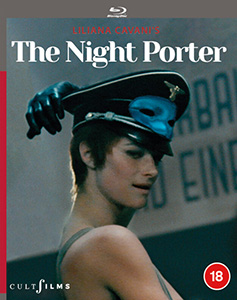 I was about 9 when The Night Porter came out, so missed the furore surrounding its release, and I’ve read that around the time it came out Hollywood had produced a few Pseudo-psycho-sexual Nazi-ish films (The Damned 1969, Cabaret ’72, Salo ’75) sort of looking at the Third Reich in a sexual-psychological way, rather than a ‘war is hell and all Nazis are evil’ way.

They told tales of sordid profane activities, immorality and…fashion.  The Night Porter does belong in this canon, and despite being somewhat over acted in parts, and dated in others, it’s still powerful enough to make you feel a bit uncomfortable in your pants.

During World War II, Max (Dirk Bogarde), an SS officer who poses as a doctor in an extermination camp, comes across the ‘little girl’ (it never says how old she is, but its suggested she is his ‘’little girl’) Lucia  (Charoltte Rampling) he abuses her, mentally, physically and sexually. They embark on an ambiguous sadomasochistic relationship. While Max is Lucia’s torturer, he is also her protector.

In 1957, Lucia, now married to an American orchestra conductor, meets Max again by chance as he is now the night porter at a hotel in Vienna, and a somewhat reluctant member of a group of former Nazi comrades, including a countess and a Ballet Dancer who have been carefully covering up their pasts by destroying documents and making witnesses to their wartime activities ‘disappear’.

There are harrowing ‘in camp’ scenes depicting a very thin, naked and young looking Rampling dressed as a Nazi (tits out) singing in a provocative way, scenes of male rape, torture and a head in a box.

I was conflicted watching it, not because of the Nazi story but rather the central ‘love affair’ between Max and Lucia, she gives up everything, her husband, her life, and runs away to be with her one time lover/tormenter. In the extras Rampling discusses her characters love for her one time captor, with not a hint of Stockholm syndrome.

The two documentary extras in this are excellent (no bland commentary thank God). One by the director Liliana Cavani  – who goes in depth from financing to actually making the film, and similarily with Rampling, and I have to congratulate Cult Films for these extras, as watching the film, then the extras, turned The Night Porter in a wholly different experience for me, from antecedents to the “hair-in-the-gate”.

So despite its flaws, Cult Films release of The Night Porter coupled with these two essential (and new) documentaries which give a brand new slant on this film by reminding us just what the vibe was in 1974 for filmmakers, really does make this an unmissable release and helps secure the films place as a true cinema classic.

Review by Tina from a disc kindly supplied by Cult Films via Witchfider PR.

I used to live in Los Angeles and write about Rock bands. Now I live in wonderful Wales and write about films. I like video games (especially RDR2) and am also a painter...gratuitous plug: follow my art account on Instagram @artbytinar
September/October 2020 Review Roundup Review: Cinema Paradiso (UHD Blu-ray)