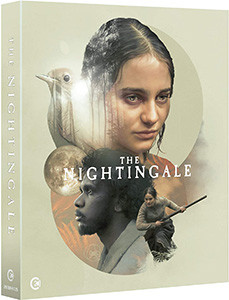 Imagine if awards ceremonies weren’t absolute shite. If only truly really GOOD films were allowed to be entered and then won. The Nightingale, an Australian film written and directed, by Jennifer Kent (The Babadook), would win best film, best screenplay and stars Aisling Franciosi as Clare and Sam Claflin as Hawkins would win best actor awards.

Set in 1825 in the penal colony of Van Diemen’s Land (present day Tasmania), the story follows a young Irish female convict who’s married to a fellow convict and has a young baby.

This film was released in 2019 and is currently on Amazon Prime, however, this new Limited Edition blu-ray release from Second Sight Films is a thing of film-beauty. Packed full of extras, including interviews with the actors, how they made the film, costume design and some background on the life of convicts sent to Australia during this period.

I think a lot of people who’ve seen this on Amazon will buy this gorgeous release, so talking about the story won’t be a huge spoiler.

This is a hard watch. It was a desolate time. The majority of convicts shipped overseas from Ireland and the UK had done something as simple as steal bread to feed their starving family, they were lucky if they didn’t die on the voyage over and when they got to their destination they were little more than slave labour for the English/Dutch. The soldiers sent to guard them largely hated being in this desolate land and coped by abusing all the people they possibly could, convicts and native aborigines. A sweeping statement as I’m sure not ALL soldiers were psychotic maniacs. However historical evidence suggests that even the ‘good’ ones were racist murderers.

This is a rape/murder/revenge film, and in the hands of anyone else it could have been pure titillation and explotation, but Kent gives us rounded characters, even though we don’t like them, she portrays them as not just evil.

The performances from all the cast are really something, Baykali Ganambarr as Billy the native tracker gives such a nuanced performance, Damon Herriman as sycophantic sergeant Ruse is a wonder. Harry Weaving as the ‘good soldier’ who kills Clare’s baby does tug your heartstrings then you wonder why? But Aisling Franciosi as Clare is not only beautiful and fierce but just IS Clare. Her pain and determination is palpable (and I was amazed that she could give such a powerful performance aged only 24). But the real stand out here is Sam Claflin, known for big Hollywood roles like The Hunger Games and Pirates of the Caribbean, he started to show his acting chops in My Cousin Rachel and Peaky Blinders, but here, acting really against type as the handsome and ambitious Hawkins, raping and murdering his way to a new job, he is a revelation, taking a young convict boy under his wing to brutally berate then murder him on a whim.

Again, when I see a film as good and as important and memorable as The Nightingale, I lament that fact that they are ignored by awards people. This film would sweep the board. An amazing film, with wonderful acting.

I used to live in Los Angeles and write about Rock bands. Now I live in wonderful Wales and write about films. I like video games (especially RDR2) and am also a painter...gratuitous plug: follow my art account on Instagram @artbytinar
JUSTIN LARNER ‘Find Your Way Home’ video, out now Review: Pang Adventures