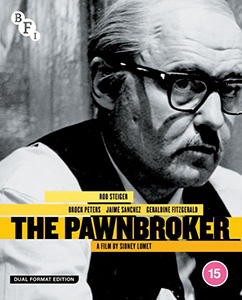 My dad loved old ‘action’ films and has been a lingering influence on me. Being a girl, the only time I could get close to him was to watch a movie, normally on a Sunday afternoon. As an adult I find some of his choices quite revealing, as a 15 year old I didn’t get the significance of this lower class miner picking out for instance, The Pawnbroker as one of his favourites.

Sol Nazerman (Rod Steiger) is an old, rough looking, Jewish pawnbroker in New York. In flashbacks throughout the film we see Nazerman as a younger man, happy with his wife and two children, then later we see them in a concentration camp, his wife being used as a sex slave for Nazi officers.

There’s the easy explanation for his distance and bitterness. But Steiger’s performance is much more than that, he’s filled with a tombed in hatred for all men and women, even the woman he’s sleeping with (its never really clear if she’s his wife or lover) he treats with overt distain. People come in with objects to pawn, he doesn’t look at them, they are the objects.

Jesus Ortiz (Jaime Sanchez) is a young Puerto Rican who works for him, and his girlfriend is a prostitute who works for Rodriguez (Brock Peters – who interestingly was the first ‘openly gay’ character in a film causing a lot of problems with the motion picture production code, along with some topless nudity). Ortiz tries to be friendly with Nazerman who isn’t interested. Nazerman money launders for Rodriquez.

Ortiz’s girlfriend visits the shop and tries to seduce the pawnbroker, he rejects her. When she tells him she works for Rodriguez, he realizes that Rodriguez owes his wealth to the brothels runs.

For the first time we see some emotion off Nazerman as he remembers his wife’s repeated rape by the Nazis.

Throughout this film Steiger looks as if he’s going to explode, that all the hate in him is simmering  just under the first layer and he’s going to erupt, and after the enviable tragedy occurs, he does finally burst open, but in silence.

I don’t know if this was the first dramatic film to look at a holocaust survivor, but its seems to be one of the earliest, and although quite tame, and despite it’s somewhat ‘West Side Story’ feel (which isn’t a bad thing in my book) it’s still a hard watch even now, mainly because of Steiger’s amazing acting.

Maura Spiegel’s wonderful commentary on the film and director Lumet is a huge plus too.

The Pawnbroker is released 16th August 2021.

Review by Tina from a disc kindly supplied by BFI.

I used to live in Los Angeles and write about Rock bands. Now I live in wonderful Wales and write about films. I like video games (especially RDR2) and am also a painter...gratuitous plug: follow my art account on Instagram @artbytinar
A November Bombshell! May – July 2021 Review Roundup