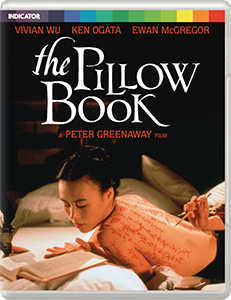 Peter Greenaway is well known as a golden director of languid art house movies that enrapture the viewer with their colour, emotion and exceptional mise en scène. The Pillow Book tells the story of Nagiko (Vivian Wu) who becomes obsessed with writing in all its forms after her father (Ken Ogata) writes on her face and body characters of good fortune for her birthday year after year, while her aunt reads a list of ‘beautiful things’ from Sei Shonagon’s “Pillow Book” (which is what a lady’s private diary was called in ancient Asian culture).

It is after this writing ceremony that a young Nagiko sees her father being sodomised by his publisher, as payment for publishing his writings. Well at least that’s what it looked like, as much like the rest of the narrative, it’s attempt at being arty for art’s sake just leads the viewer to complete confusion.

We follow Nagiko’s story as she (possibly) becomes a supermodel (she’s definitely rich) and goes through a succession of lovers, all of whom write on her, unsatisfactorily, until she meets Ewan MacGregor.

Ewan was 25 when he made this and it’s pretty obvious he couldn’t believe his luck as he has this constant shit-eating grin on his face, as not only is he in a Peter Greenaway film, but he gets to pretend shag a hot woman (a lot) with his knob out (a lot). He also gets to shag the publisher. Yes, the publisher who is now an old man and was shagging Nagiko’s dad.

It’s all very convoluted, and unfortunately, despite it being a very beautiful looking film, it’s very boring. I’d even go so far to say that it’s so far up its own artistic arse, there’s no sunlight. I lost total interest in its self centered characters and displaced time line. It’s all fluff and no substance.

So here’s a suggestion, if you want to watch a really GOOD Peter Greenaway film, try The Draughtsman’s Contract (or The Cook, the Thief, His Wife and Her Lover).

I used to live in Los Angeles and write about Rock bands. Now I live in wonderful Wales and write about films. I like video games (especially RDR2) and am also a painter...gratuitous plug: follow my art account on Instagram @artbytinar
Review: Spycies Review: Chained For Life