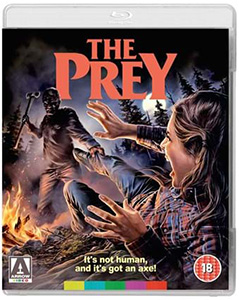 Let’s not beat around the bush here, The Prey isn’t a good film.

However, this Blu-ray release from Arrow Films is fantastic and loaded with a slew of entertaining and informative extras that will keep you enthralled every time you put it into your Blu-ray player.

A new 2k restoration from the recently found original camera negative means that The Prey has never looked better, highlighting the ‘interesting’ make-up on the films horrifically burned antagonist.

The narrative is a by the numbers slasher film, though interestingly it was filmed in 79-80, making it a contemporary of the likes of Friday the 13th, rather than a cheap cash-in on the success of the slasher genre during the 80s.

A prologue set in the 40s shows a terrible fire in which a child was the only survivor. Jump forward 30 years and three young couples set off into the mountains for a weekend of climbing, drinking and the obligatory ‘rumpy pumpy’.

Can you guess what happens next?

Despite the killings, The Prey seems more like a meandering low budget wildlife film, with long lingering shots of birds, deer, snakes, and a multitude of other living creatures, all inserted into the narrative via stock footage where the term ‘colour grading’ never passed anyones lips in an attempt to make it match with the main footage.

When animals are not onscreen, the humans do little else to engage you…unless you want to see a sheriff idly chewing on a sandwich for far too long while talking bollocks.

The third act ups the ante a little (though it could hardly have got any worse) with the kill count increasing, but when the killer looks like his face has been put into a bucket of papier-mâché and then quickly painted over, it does nothing to increase the tension.

Despite all of that, it is the aforementioned special features that really make this worth considering as a purchase.

The addition of 3 cuts of the film is interesting, but the audio commentaries, interviews, Q&A, plus much more, really adds some entertaining value to this well packaged set.

The Prey could well go down better late at night with friends and your alcoholic drink of choice (I watched it alone in the afternoon with a cup of tea), but as a curiosity piece that may well have passed you by so far, this is the definitive version for you to buy.

DISC ONE – US THEATRICAL CUT