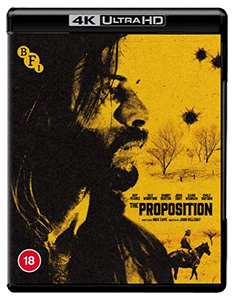 After a shootout in a brothel, Stanley captures 14 year old Mikey and Charlie and tells them that he will have Mikey executed by Christmas ( 9 days away) unless Charlie finds and kills their brother Arthur for the rape, mutilation and murder of the Hopkins family.

We follow Charlie’s hurried journey to find the brother he left taking the youngest sibling with him. At the same time we are introduced to Captain Stanley and his wife Martha (Emily Watson), two families, appearing to be different while essentially the same.

I’m not a big fan of Winstone or Huston, but here they both give possibly the best performances of their careers. Huston as the somewhat ‘spiritual’ psychopath who can recite poetry then cut a man’s head off. He plays Arthur as a disassociated madman, dark eyes staring into the distance, probably not thinking of anything.

Winstone portrays Stanley as a man who’s seems to be fighting his true nature, risen in the ranks and is aware that his wife is several classes above him, he rebels against his own barbarism to be a gentleman to his wife as Watson’s Martha is a true lady in every sense, from her pristine clothes to her mannerisms, who is also aware of class, jokingly putting on a fake ‘Cockernee’ accent to appease her husband. But her tenderness towards him shows this is a love-match.

Along with David Wenham as Eden Fletcher (who is more or less in charge of the town and gives Stanley his job) and John Hurt as Jellon Lamb, the casting is superb. None more than Guy Pearce (Charlie) who has to make a choice – which brother does he save? Despite his contempt for his psychotic brother he does waver, as even though he appears to be the most ‘stable’ of the Burns brothers, he’s still a murderer and outlaw, and one that despite his poor origins still retains a sense of the importance of family.

Of course the other major character in this film is the location, literally in the middle of nowhere, Winton in Queensland. The heat along with the MILLIONS of flies gives this story an almost dream-like edge to it.

Released in UHD each act of violence pings out, but it also has a beauty to it, and packed with a great selection of extras this really is a must-buy. 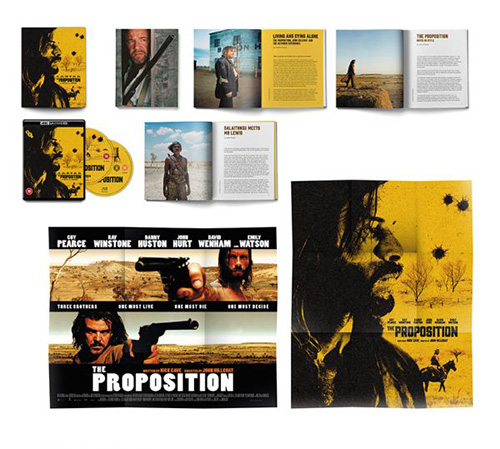 New 4K restoration released on both UHD & Blu-ray and on iTunes and Amazon Prime on 11th April 2022.

I used to live in Los Angeles and write about Rock bands. Now I live in wonderful Wales and write about films. I like video games (especially RDR2) and am also a painter...gratuitous plug: follow my art account on Instagram @artbytinar
Soundcheck interview: Pete Jupp Review: House of the Long Shadows