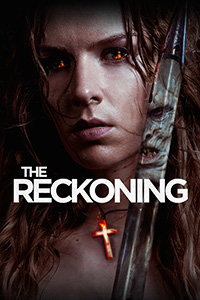 After watching the trailer for Neil Marshall’s new movie The Reckoning, I was expecting something along the lines of Hagazussa or even Robert Eggers The Witch.
But alas no, the promise of witches and huge devils rampaging through the English countryside during the Plague of 1665 is trailer-only fodder.

I have huge respect for Marshall, his early film career is filled with pure gold (Dog Soldiers, The Descent) and he’s even dipped his toe into and elevated several TV series (Hannibal and his infamous Game of Thrones episodes) but it seems he has lost his way with his last few movies.

The Reckoning follows the story of the Haverstock family, father Joseph (Joe Anderson) catches the Plague with some manipulation from the evil squire (who wants his farm back) and on returning home, rather than pass the plague onto his baby daughter and his wife Grace (Charlotte Kirk), he hangs himself.

Devastated, she takes a good ten minutes to drag his sword outside to then amazingly lift the sword above her head to cut him down, and this is where the film starts to turn silly.

It’s pretty obvious that the initial story idea was to examine the sexism, misogyny, etc of witchcraft in the 17th century, but what could have been a horror film with a message of female empowerment conquering patriarchy, turns into a laugh out loud post-Hammer Horror waste of time.

This is the story of a peasant woman accused of witchcraft, yet throughout her blonde hair is never out of place, her eye makeup is perfect, her lips are never without some gloss and even after having the soles of her feet burnt, and some sort of torture device inserted into her vagina to cause considerable pain and haemorrhage, she is as clean as a newly showered film star. She consistently emerges from extreme torture sessions without so much as a limp.

In fact the only good thing in this film is Sean Pertwee, who plays a sort of Witchfinder General Judge Moorcroft.

Oh but there IS a bit of devil (Ian Whyte) in it, a hallucinogenic (?) one, who appears in her cell at night and shags her. He looks pretty great but has no real ‘part’ in the story and just seems to be there with no real purpose or explanation.

Review by Tina from a streaming link kindly supplied by Vertigo Releasing via Fetch Publicity.

I used to live in Los Angeles and write about Rock bands. Now I live in wonderful Wales and write about films. I like video games (especially RDR2) and am also a painter...gratuitous plug: follow my art account on Instagram @artbytinar
ABC…D of gaming: February – March 2021 Arielle announces live streaming sessions and new single “Inside & Outside”