Review: The Secret of My Success 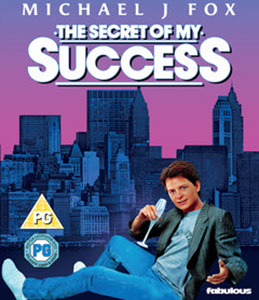 Thanks to our good friends at Fabulous Films (hello Isabel), I was sent some Blu-ray releases from their back catalogue that I hadn’t watched since the days of VHS!

So to begin, here’s what I thought about revisiting The Secret of My Success.

This movie is so 1980s! In fact, it couldn’t get any more 80s if it squeezed itself into some lycra, backcombed its hair, then moonwalked down a rain soaked neon-lit street to a synth and saxophone score.

Now some people may view that as a negative, however, anything 80s is always good with me.

Michael J. Fox (looking about 12 years old…as he did for about 20 years) is Brantley Foster; a business college graduate from Kansas who travels to New York to find his fortune…and to hopefully get laid too. Which he does. With a few people.

In fact there’s quite a lot of sex in this movie! From Brantley shagging both the wife of his boss and Christy (Helen Slater), who is one of the employees and the girl he falls in love with and then becomes his girlfriend, to his boss shagging Christy (it’s complicated!), to Brantley walking in on a couple having sex in an office store room, and then the neighbours at his run down apartment going at it so hard and so often that the partition between the 2 rooms begins to shake and he conducts their sex noises, climaxing (pun fully intended) in him opening a spurting can of beer.

Anyway, putting the sex to one side for a moment (which is more than Brantley does), he gets a job at a business firm headed by his cantankerous and leering Uncle Howard (Richard Jordan).

Starting in the mail room, he soon discovers a way to lead a double life working delivering the mail in the offices (as Brantley Foster), as well as living the high powered life as one of the “suits” (Carlton Whitfield) doing business deals.

Of course this double life can’t be sustained for long, and throw in the tangled web of sexual relationships and you have a disaster waiting to happen. But will everything end in tears or will there be a happy ending (no pun intended on that one!)

Michael J. Fox saves this movie from being another run of the mill comedy/romance movie that proliferated during the 80s, and his onscreen presence makes every scene that he is in immensely watchable. If any other actor was playing his part(s) it would be a very different movie indeed.

The overpowering soundtrack blasts out 80s power ballads at all too regular intervals, while the obligatory 80s montage appears as always to get the narrative rolling along with as little fuss as possible.

The Secret of My Success plays out like a theatre farce, and I wouldn’t have been surprised if a vicar appeared in the middle of a tea party and his trousers fell down. Though there is already a proliferation of “trouser falling” scenes without that ever having to be in it.

Yes it is dated. Yes it is cheesy. Yes it is predictable. But thanks to Michael J. Fox, there’s enough here to enjoy, especially if you grew up during that crazy decade and can relate to a lot of what is onscreen.

Also, it certainly looked and sounded a lot better than that ex-rental VHS I used to have.

I look forward to taking another trip down memory lane with these Fabulous Films Blu-ray releases very soon. Keep an eye here on our website for the next one.