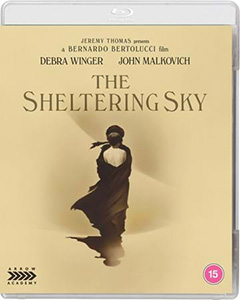 Many years ago I was on holiday in Lido De Jesolo, and as found in most hotels, someone had left behind a book, this time it was a copy of Paul Bowles The Sheltering Sky.  I read it that week and fell in love with the story.

I guess a story of existential despair is not everyone’s cup of tea, and the thought of watching a two hour film about a couple who are travelling through North Africa in an attempt to stay married can put you off. But this is such an immersive film, even if you hate the story and the actors, what’s onscreen makes it worth the time.

Bowles himself says that it’s NOT based on him, his wife or his life. But… yes it more or less is. He led such a varied and interesting life that it’s worth a read about him before you dip your toe into the film.

Three Americans arrive in post war Algeria (1947). Port Moresby (John Malkovich), his wife Kit (Debra Winger) and friend George Tunner (Campbell Scott) are on a trip that will take them deep into the Sahara Desert. The Moresby’s will stay for a year or two.

The story follows these 3 with the addition of meeting the ghastly Mrs Lyle; a travel writer, and her horrible son Eric (a suitably boil ridden Timothy Spall playing his usual low life character). I could go through the plot. But no, the plot goes hand in hand with what’s onscreen and you have to see it, hear it, and experience it with the characters.

We’re lucky to have a 4K home cinema set up, so I’m used to seeing films in a cinematic way. As The Sheltering Sky started I genuinely gasped to see it onscreen in this superb Blu-ray release. It is BEAUTIFUL (but then it is directed by Bernardo Bertolucci who is the Italian David Lean).

And this was only a Blu-ray. The sound and picture really is excellent, which is vital to this story. As I mentioned this is an incredibly immersive film, despite been set just after WW2 you get a real ‘feel’ for Algeria, it’s like you can smell it, feel the heat, the flies, the ‘otherness’.  It is quite breath taking.

As usual the Arrow extras are fantastic. There’s a great archival documentary making of and a fantastic video essay by David Cairns & Fiona Watson.