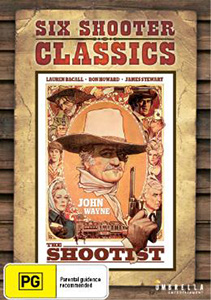 Mirroring Wayne’s own illness, this tells the story of John Books, a once lethal killer, who now just wants to die peacefully.

Books arrives in Carson City, Nevada, in 1901. There, he learns from his doctor (James Stewart) that he’s got cancer, and he’ll die soon. He rents a room from Mrs. Rogers (Lauren Bacall), and her son, Gillom (Ron Howard), finding out who Books is/was, starts spreading the rumour, which leads to several gunfights, ending in one epic fight worthy of any Siegel epic.

The Shootist is subtle, effective in tone and pace and is a touching tribute to both Wayne and the old style Western in general.

Wayne is just perfect as the dying gunfighter attempting to live out his last days in peace and obscurity, but is prevented from doing so by various younger gunmen turning up who want to prove they’re either better than him, or they want revenge for an age old wrong doing. It’s a rather sentimental film and does examine the tale through the eyes of ‘old-timers’ reconsidering their lives.

If I had any complaints about the film is that it has a distinct 1970s TV movie feel about it.

A lot of people think John Wayne couldn’t act, which is fair enough when you consider his range was cowboy/war hero/Gengis Khan. However, this film (along with The Sons of Katie Elder and the amazing The Searchers) proves his acting chops. He certainly made me cry.

Review by Tina from a disc kindly supplied by Umbrella Entertainment.

I used to live in Los Angeles and write about Rock bands. Now I live in wonderful Wales and write about films. I like video games (especially RDR2) and am also a painter...gratuitous plug: follow my art account on Instagram @artbytinar
Black Sabbath 50 Years exhibition Paul Gilbert Unveils New Song