Review: The Smallest Show on Earth 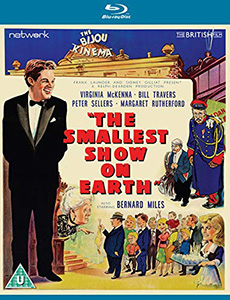 Thrilled to hear that they have inherited a cinema in the north of England after a distant relative passes away, Matt and Jean Spenser (Bill Travers and Virginia McKenna) see this as an end to all of their money worries and instantly plan to sell it and live a life of luxury with the money from the sale.

Upon arrival they find that it is a ramshackle cinema and known locally as ‘The Flea Pit’, with bigger and newer cinema ‘The Grand’ just across the road and taking all of the local business, while there property is run by 3 elderly and incompetent staff members (all played superbly by Peter Sellers, Bernard Miles and Margaret Rutherford).

Solicitor Robin Carter (Leslie Phillips) offers to help the couple with a proposed sale to the owner of The Grand, who wants to use the land as his cinema’s car park, but when faced with a financial offer which insults them, Matt and Jean decide to go head to head with The Grand in a battle to take their audience from them.

The Smallest Show on Earth is 80 minutes of classic British humour, all played out by a cast on top form. So good is his performance that it took me a few minutes to recognise a 32 year old Peter Sellers playing the old, alcoholic projectionist Percy Quill.

A touching scene where the 3 cinema workers lament the passing of the days of silent cinema, is a perfect counterpoint to the slapstick antics that happen in the auditorium when Matt and Jean devise new ways in which to attract a paying audience.

Despite the advantages of multi-screen cinemas with their high-tech visual and sound systems, I miss the local cinema of my youth. Despite its uncomfortable seats, mono sound and cloud of smoke from the smoking section which made every movie look like the morning mist was rising, it was the foundation of my love for the moving image. The Smallest Show on Earth not only rekindled those treasured memories of frequenting a local ‘Flea Pit’, it also regularly massaged my funny bone and left me smiling long after the screen had gone blank.

The Smallest Show on Earth is released on 11th March 2019, and you can buy it by clicking HERE. ALL money raised by purchasing from Amazon via our website is given back to our listeners and followers in upcoming competition prizes. The more people buy, the bigger our prizes.

Review by Dave (host of 60 Minutes With) from a disc supplied by Blue Dolphin Films from Network on Air.