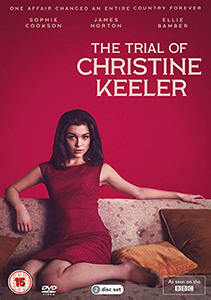 Most people under 50 will have no idea what the ‘Profumo Affair’ was, so the BBC making a series about it was surprising, but then in an age where no one really knows for sure how many children our Prime Minister Boris Johnson has with various concubines, perhaps they intended to hold a mirror up to society and how things haven’t really changed. That the over privileged rich and powerful can do whatever they want, with no ‘punishment’ because the tabloid press, despicable as they are, are not powerful enough to hold people accountable for their actions anymore. Or perhaps people’s beliefs have changed, where a sex scandal such as Profumo’s actually brought down a government. Now most of the people of Britain think it’s funny, or even charming to be a blubbering rapscallion.

The Trial of Christine Keeler is the story of the Profumo affair told from a rare perspective: hers. The  19-year-old model Keeler (Sophie Cookson) isn’t seen as an airheaded dolly bird for a change, and the series does successfully paint a sweeping picture of that era.

Though somewhat like A Very English Scandal, this has none of the humour scandal had. It’s very serious, yet at the time Mandy and Christine were constantly in the tabloids quipping like John Lennon on laughing gas.

Although factually true, and forthright in examining racism (Keeler had a penchant for black men) it doesn’t really delve into the shitty background or cause of why these 2 girls ended up shagging so many men, with nothing in return. It is all said and done a bloody tragedy all round, with Ward arrested and found guilty (after his suicide) of literally being a pimp (he wasn’t, he was a manipulative social climbing voyeur who liked sex), this programme left me rather disinterested and … empty.

The acting was good, all of it was good, but it somehow didn’t ignite a sparkle of interest in me and by episode 3 I was struggling to make myself continue watching. I think this was because I knew the outcome and the series itself wasn’t really giving a new angle on events.

I used to live in Los Angeles and write about Rock bands. Now I live in wonderful Wales and write about films. I like video games (especially RDR2) and am also a painter...gratuitous plug: follow my art account on Instagram @artbytinar
ABC of gaming: November 2019 – January 2020 Review: Endless Night