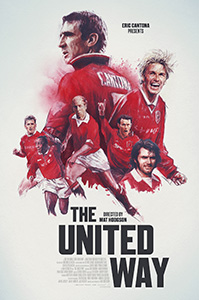 I have had zero interest in football for 30 years now, but during the 1970’s and 80’s myself & my best mate used to go and watch Manchester United. Driven to Manchester by parents in our earlier years, and then driving ourselves when we got older.

As my interest in football waned, my mate (Ike) continued to follow Man Utd. As a season ticket holder he was there for every game, even travelling away for cup finals and more. And yes, he was even at Camp Nou in Barcelona in 1999.

So through watching the club myself and always having Ike’s stories to keep me informed about what was happening, the many players and managers featured in this documentary were well known to me, and it was a very enjoyable experience seeing them all again, both as they are now, and also in action back in their playing days. I could still recognise the likes of Sammy Mcllroy, Arthur Albiston, and more.

Hosted by Man Utd legend Eric Cantona, The United Way takes a 90 minute tour through key moments in the history of the club, from ‘The Busby Babes’ through to Alex Ferguson bringing back glory to the club, with various stops to focus on Cantona himself.

Although I couldn’t tell you who is top of the Premier League at the moment, this hugely enjoyable look at Manchester United brought back great memories of when I used to enjoy the game. Back when it was filled with personalities instead of prima donnas, and was a sport instead of being ‘content’.

Coming out at a time when the recent European Super League fiasco brought football supporters across the country together in a successful effort to keep the game more as it was originally intended to be before big money was pumped into it. The United Way is a timely look back at what football, and particularly Manchester United, means to both the players on the pitch and the fans who have followed them across generations.

The United Way is released on 10 May on Blu-ray, DVD & Digital Download and launching on Sky Documentaries and streaming service NOW on May 24th.

Review by Dave from a streaming link kindly supplied by Dazzler Media via The Warrior Agency.