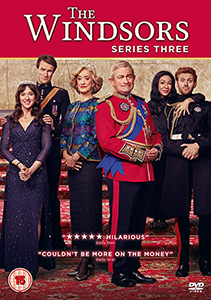 The Royal Family: loved by millions the world over, perhaps not so much in Britain. Obscenely wealthy, out of touch with 99.9% of people, entitled, thick as shit and all of them pointless, headed by a monarch who has never done anything of note, whose contribution to greatness is a starring role in Netflix The Crown. (methinks Tina won’t be getting an M.B.E. anytime soon – Dave).

Queenie however is absent from all series of the Windsors, no, they thankfully concentrate on the “real meat”: her dysfunctional kids and grandkids.

Series 3 of The Windsors is more of the same biting comedy that doesn’t shy away from ripping the royals a new one. Even Andrew’s ‘special’ friends are constantly brought up; paedos, dictators, while Andrew himself turns up with some different totty on his arm.

Of course they are all cartoon versions of what we think they are, and the storylines seem daft but are also based in truth. Like a twisted fairytale everyone plays a part; Charles is waiting for his mother to die, Camilla (the evil queen) fag hanging out of her mouth shags her way to the top, William (well meaning, thick as shit) and Kate (a gypsy) are plain boring, while Pippa married with a kid she can’t remember the name of, yearns to be a princess like her sister and pursues Harry (REALLY thick as shit) , who is married to Meghan (basically, Meghan).

Favourite characters are Princess Anne, who glides Nosferatu-like and spits, and who in this series gets to let her hair down and have a sleepover with David Beckham. Also Fergie, Eugenie and Beatrice, hoovering on the outskirts of the family, useless and lazy. The way they (and William) pronounce words is a JOY, absolutely cracks me up. It also makes me dislike the royals more as they’re literally on the mark.

This series includes episodes on the government asking the royal family to cheer up Britain after Brexit, but Charles, Anne, Edward and Andrew are on strike and want the ‘Fab Four’ to join them. Charles and Camilla visiting the gypsies, while Fergie and the girls go to Glastonbury. Charles officiating at the Church of Satan. Ending the series with Donald Trump asking Charles and Camilla to be King and Queen of America.  It’s all a bit silly, definitely VERY funny and has re-watchability.

Fantastic series, really great comedy acting and just what you need when you can’t leave the house for 6 months.

I used to live in Los Angeles and write about Rock bands. Now I live in wonderful Wales and write about films. I like video games (especially RDR2) and am also a painter...gratuitous plug: follow my art account on Instagram @artbytinar
February/March 2020 Entertainment Show Spotlight Reflection: Creepshow