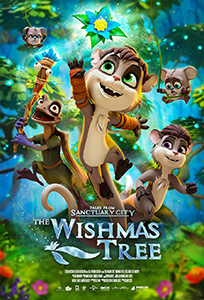 Kerry is an adventurous possum living in an idyllic paradise called Sanctuary City. All the animals live in harmony together and life couldn’t be better. The only problem is Kerry finds it a bit boring, and dreams of stepping out of the safe confines of the city to explore the wildlands.

At the centre of Sanctuary City is the Wishmas Tree. The tree brings life to the city and also grants wishes to anyone who picks the flowers. The only rule is there should be at least one flower left on the tree. In her haste to make her wish come true, Kerry picks the last flower. This triggers a series of events which freezes the city, whilst the Wishmas Tree starts to die. Kerry must now face a perilous journey battling extinction itself, as she tries to save her friends and family.

I’ll be completely honest and say I wasn’t expecting much from The Wishmas Tree, however I’m pleased to say I was pleasantly surprised! The characters, story and animation are above average, and the running time didn’t drag. It held the attention of my 8 and 3-year-old daughters, which should give you some idea of the target audience.

There are themes about the importance of family, believing in yourself, thinking of others, and looking after the environment. So, in that respect, I have to commend the positive messages The Wishmas Tree wants to share.

One point about the animation is that it did feel like watching an extended video game cutscene. That’s not to say it is bad; far from it. Both my daughter and I commented that you can imagine the movie prompting you to pick up a controller and take part in the experience. A recent example of this is Ratchet and Clank from 2016, where the videogame incorporated cutscenes from the movie. I could see The Wishmas Tree having its own spin off game, as the characters and setting lend itself to a cute puzzle platformer.

As always it doesn’t matter what I think, so I asked my children what they liked and disliked.

The Wishmas Tree isn’t going to trouble Disney or Pixar anytime soon, but I found it gentle experience with some positive messages. Most of all, my children enjoyed it, which is the main thing.

Review by Chris from a streaming link kindly supplied by Signature Entertainment.

I love video games and movies as much as I love my children. However, I'd rather face off against the worst end of level boss, and watch the scariest horror movie than visit another soft play! Thanks for taking the time to visit the website and read this review. Please send any complaints to Dave and any money to me!
Robert Jon & The Wreck announce May 2021 UK Tour GIVEAWAY: Win the 30 Disc complete series of Northern Exposure