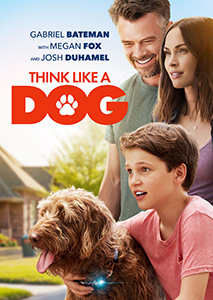 Oliver is a whiz at science and shares a special bond with his pet dog Henry.  During a science experiment Henry believes he has found a way to communicate using telepathy. Things don’t quite go to plan, and through a freak accident he manages to create a mental link with Henry, meaning they understand each other.

Whilst this is happening, Oliver must deal with his parents (Megan Fox & Josh Duhamel) who are on the verge of splitting up. Can he and Henry find a way to get them back together? Oliver also has to try and figure out his own emotions and learn how to talk to the girl he likes at school. If things weren’t complicated enough, a science genius (Kunal Nayyar) is trying to steal Olivers idea. Throw in hapless government agents, and Think like a Dog has all the ingredients to be a cracking family movie…. Doesn’t it?

If I were to use one word to describe Think Like a Dog it would be bland!  There isn’t anything particularly wrong with it, but it also doesn’t do much to get you excited. Although the running time is only 1hr 27 minutes, it seemed to drag, which is never a good sign.

One of the other issues is the inclusion of Olivers best friend Xiao who lives in China. The first question is what 12-year-old has a best friend who lives in another country!? I suspect the reason behind this is probably because the film appears to have been partly financed with money from China. As a result, this element of the story feels shoehorned in as an attempt to appease the financial backers. All it succeeds in doing is needlessly complicating matters and diluting the story. An example of this is Oliver playing a virtual reality game with Xiao, whilst he is standing on The Great Wall of China! I know I’m a cynical old git, but this felt odd and out of place.

We watched Think Like a Dog together as a family and my 3-year-old lost interest quickly, whereas it held my 8-year olds attention. My wife thought it was a bit plodding and not particularly exciting. On a positive note it was fun seeing Kunal Nayyar playing against type, after seeing him play Raj in The Big Bang Theory.

I appreciated the sentimental themes about the simple things in life are what really matter, such as being happy, and not constantly chasing the next best thing. Although Think Like a Dog has its heart in the right place, it unfortunately missed the mark and left us feeling a bit flat. A case of more bark than bite.

Review by Chris from a disc kindly supplied by Lionsgate UK via WitchfinderPR.

I love video games and movies as much as I love my children. However, I'd rather face off against the worst end of level boss, and watch the scariest horror movie than visit another soft play! Thanks for taking the time to visit the website and read this review. Please send any complaints to Dave and any money to me!
Adventures of Chris Announced for Nintendo Switch Review: Hunting Simulator 2