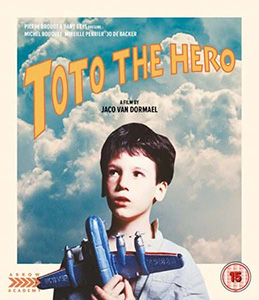 Sharing thematic similarities to the previously reviewed Life is a Long Quiet River, Toto the Hero once again has 2 newborns growing up with families who are not their biological parents.

Where Toto the Hero differs is that the narrative begins towards the end of their lives and keeps jump cutting between the here and now and various times during their lives, all highlighting the bittersweet relationship between Thomas and Alfred (played and voiced by a variety of actors as their characters age).

An 8 year old Thomas is convinced that a fire in a nursery is the catalyst for all that follows in his life, with him being snatched away from a cot surrounded by flames while a baby and his next door neighbour Alfred being brought up by the wealthy family that he thinks is rightfully his own.

Thomas is in love with his sister Alice (leading to some uncomfortable scenes…especially where he, and the viewer, sees a young Alice naked) and also dreams of being a secret agent.

These scenes from Thomas’ youth are intercut with him as an old and angry man, bemoaning a fate that he thinks is unjust and jealous of the life Alfred has led in his place, and when Thomas meets a woman called Evelyne, everyone’s lives become more intertwined than Thomas could imagine, leading to a finale which fate could well have played a hand in.

Toto the Hero confronts the pangs of lost youth, lost love, jealousy and remorse, all while keeping the question about fate firmly at the forefront of Thomas’ actions, which echo the quote from Terminator 2 “There is no fate but what we make for ourselves.”

The twisting and time-jumping narrative has moments of humour, pathos, and sadness, and your empathy for Thomas keeps wavering as his actions, and the actions of those around him, continually paint him in a different light, which give moments that you feel sorry for him, and then these moments are replaced with anger as he seemingly tries to derail his own life.

Toto the Hero gives an interesting look into how your life can/could be so different and is presented on Blu-ray for the first time by Arrow Films.

Getting "in the zone" and already having a great time with it. @R8Games twitter.com/60MWPodcast/st… pic.twitter.com/LFmX4j031W

RT @ArrowFilmsVideo Tools at the ready - We want to see your pumpkin carving skills! 🎃 Get in the Halloween spirit early and join in the #AVCARVEOFF. Winning entries will receive an Arrow Video Bundle - Comp closes 11:59pm BST Oct 30 - Get crafting! pic.twitter.com/xk23f61G1I

Back in May last year I had the pleasure of meeting the team behind Pacer: 60minuteswith.co.uk/live-even… Now, 2 days before its launch on PS4, Xbox One & PC, I'm getting to play it on my PS4. Review on our website soon. @R8Games pic.twitter.com/3PWBWJ9vPJ

RT @SecondSightFilm **DAWN OF THE DEAD: THE TRAILER** With release round the corner a big thx to our friends @FinalFramePost @FidelityUHD @SeverinFilms. Ltd to only 12,000 UHD & 6,000 Blu-ray - don’t miss out! Order at bit.ly/Dawn4KUHD bit.ly/DawnBluRay and get 4 exclusive art cards! pic.twitter.com/aYZXkkKghl

RT @grimmfest We are delighted to announce that #Grimmfest has been named by @moviemakermag as one of the World’s 50 Best Genre Fests of 2021!!! grimmfest.com/grimmupnorth/2… pic.twitter.com/YDYKDbXIvg