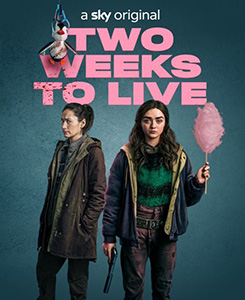 Kim Noakes (Maisie Williams) was only 6 years old when her father was killed in mysterious circumstances in front of her, and for the past 15 years has been brought up in remote isolation from the rest of the world by her mother; Tina (Sian Clifford).

Now setting off into a world that she knows nothing about, Kim begins a secret mission of honouring her father’s memory…all while carrying his ashes around with her.

Kim bumps into the socially awkward Nicky (Mawaan Rizwan) at his and brother Jay’s (Taheen Modak) local pub, which through a strange set of circumstances (and a huge white lie by the brothers) has Kim believing that she only has two weeks to live and therefore must avenge her fathers death before the inevitable end of the world that is coming.

Little does she know that her fathers alleged killer Jimmy (Sean Pertwee) is tied in with people on both sides of the law, allowing detective Brooks (Jason Flemyng...watch out for an incoming interview show with Jason) and his partner Thompson (Thalissa Teixeira) to get mixed up in the proceedings too.

Two Weeks to Live is a comedy/crime/adventure story that has a wicked streak of dark humour running all the way through that had me laughing during each episode, all backed up with superb performances by everyone involved.

Maisie Williams is perfect as Kim: the ‘little girl lost’, who, when the occasion arises, can kick ass with the best of them. While Sian Clifford’s character arc sees her slowly transforming from a hard-nosed over protective mother, into someone slightly more vulnerable and with many secrets to hide.

Mawaan Rizwan and Taheen Modak are the perfect foil to Kim and Tina, bringing to life the scenes where all 4 interact, with the 2 brothers diametrically opposed personalities creating some funny scenes while clashing heads together or out on their own.

Jason Flemyng once again shows why he’s perfectly at home playing either the good guy or bad and being completely convincing at both, while Thalissa Teixeira is fun to watch as Thompson’s long suffering distain for her police partner finally gets a chance to come to the fore.

Completing the cast of the main characters is Sean Pertwee, who while not in the series for too long, makes his character unforgettable as always.

At only 6 episodes long and each one running under 30 minutes, Two Weeks to Live is perfect viewing for those moments when you have a little bit of time to fill, but be warned…once you’ve watched one episode, it’s very hard to resist watching another…then another.

A highly enjoyable series that has an end scene which sets up series 2 in a way that I hope it is on our screens soon.

Two Weeks To Live is out now on DVD and digital.